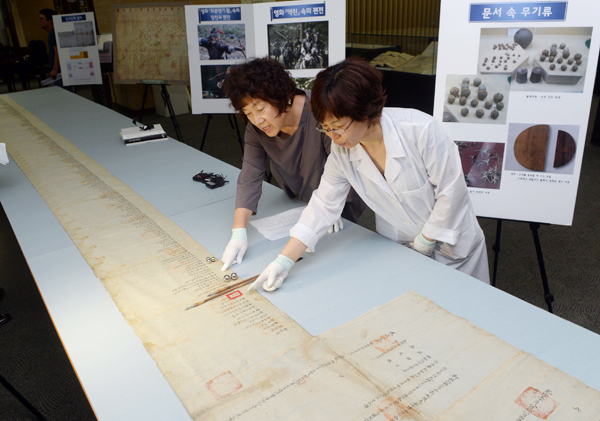 A researcher at the National Library of Korea, right, points on Monday to a Haeyu document from the Joseon Dynasty (1392-1910). The paper, made in 1784, lists the inventory from the military base in North Hamgyeong, which includes weaponry, food and other items. [JoongAng Ilbo]

Just as outgoing government officials and corporate employees leave an itemized document for their replacements listing their responsibilities, so too did workers during the Joseon Dynasty (1392-1910).

On Monday, the National Library of Korea released an original copy of a haeyu document, a record made by an outgoing worker to a newcomer to ensure a smooth transition.

The document is about 7 meters (22 feet) long and includes a detailed military inventory from the front line in North Hamgyong, which is now North Korean territory. The paper lists the number of weapons, including arrows, bullets, guns and mines, as well as the amount of crops - rice, beans and barley - saved to feed soldiers.

Of the 350 categories in the document, 300 concern weaponry.

There are about 100 Haeyu documents in existence from the Joseon era, though only seven are from a military official outside the Joseon capital of Hanyang, now modern-day Seoul. While only two scrolls reporting weaponry in North Korea are known to exist, the recently released third document carries more weight, as the area was then the front line of Joseon bordering what is now China.

“At the time, Joseon focused more on guarding its northern border because it felt the need to protect itself from threats from the Jurchen tribes,” said Kim Hyo-kyung, a researcher at the National Library of Korea.

“The threats from the southern part of the country, from the Japanese, were not so serious,” Kim added.

According to historians, the document was created in 1784 when the chief of staff for North Hamgyong, Yun Bin, left his office.

Yun, who worked in the region for about a year and a half, began recording what was available to soldiers in the area, from food to weapons and reserves.

The following year, incoming chief Kim Se-hwi checked the station’s actual inventory against the list, reporting back to his superior that the list was accurate. Details from the haeyu document show that the country put a premium on its military power following aggressive invasions from Japan and China.

In particular, soon after he was crowned, King Jeongjo (1752-1800) made strengthening military power a priority.

“The fact that all the items are meticulously documented means that the country had a very strong and sturdy military system,” Kim said. “Based on what this document tells us, we can picture how Joseon era officials planned military strategy.”

Pyeonjeon, a type of mini arrow that is shorter and swifter than others, is the best example that demonstrates how Joseon was making long-term plans to defeat its enemies before they got too close. The shorter, lighter arrow could fly twice as far as a regular projectile, around 500 meters.

Because the new arrow was harder to detect in the long range, experts speculate that it likely would have been more difficult for the enemy to spot. The list indicates that the military had 670 of these pyeonjeons ready for the more than 800 soldiers stationed on the front line.

The National Library of Korea acquired the Haeyu document in April from a private citizen.

However, the original copy won’t be available for public viewing anytime soon. For now, the library plans to digitalize the scroll and post it on its website.