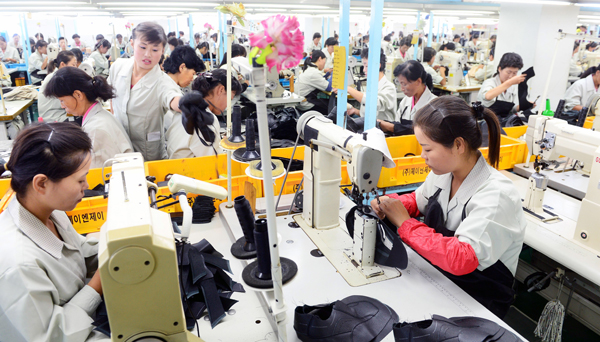 Since the Kaesong Industrial Complex reopened 160 days after North Korea’s unilateral decision to limit access to the symbol of inter-Korean economic cooperation, North Koreans have been working at J&J, a South Korean shoemaker. [Joint Press Corps]

Hartmut Koschyk, a seven-term Bundestag member and co-chairman of the Korean-German Forum, is a notable pro-Korean politician. He attended the 13th Korean-German Forum in Seoul last week and proposed various unconventional ideas on ways to improve relations with North Korea. He especially emphasized the need to expand the Kaesong Industrial Complex.

He had a chance to visit the Kaesong Industrial Complex with high-level North Korean officials and was convinced that each and every North Korean worker there was experiencing revolutionary change. It is very important for the future integration of the two Koreas for North Korean residents to have an opportunity to work in accordance with the standards of competition in the global economy.

Koschyk was certain that direct contacts with the highly advanced industrial society of the South were transformative for the North Korean workers. In addition, the high-level North Korean officials who accompanied him displayed a range of emotions after personally seeing young men and women from the South and North working together. The German legislator rediscovered the value of the Kaesong Industrial Complex.

Germany takes pride in its thorough preparation and achievement of reunification. But even Germany did not have an experimental center of capitalism and liberalism like the Kaesong Industrial Complex. Koschyk said that if here had been something similar to the Kaesong Industrial Complex, the trials and errors in the course of integrating the economies and societies of East and West Germany would have been reduced, and the shocks could have been eased.

We may not share this glowing impression of the Kaesong Industrial Complex. In fact, few Koreans see it as a great experimental site. Rather, to them it is more a symbol of the turbulent inter-Korean relationship. Nevertheless, the special economic district of the Kaesong Industrial Complex is cautiously establishing itself as a symbol of alleviated tensions, unification and investment for the future.

Earlier last year, Seoul was shocked by the temporary shutdown of the Kaesong complex by the North. Many Koreans were furious at Pyongyang’s capricious decision. Of course, Pyongyang blamed the South for the fiasco. Nevertheless, when the operation is normalized, the Kaesong Industrial Complex tends to function steadily, unhindered by external factors. Even when North Korea was threatening its fourth nuclear experiment and long-range missile launch, the factories did not stop running. The complex also has endured various adverse conditions in the past, including the sinking of the naval vessel Cheonan and the provocation on Yeonpyeong Island.

Compared to Germany, Korea has various disadvantages in terms of economic capacity and technological advancement. We should not assume that Korea will be able to overcome the post-reunification chaos just as Germany did. As Koschyk pointed out, the experience of the Kaesong Industrial Complex should be expanded and developed. If necessary, we need to establish more joint industrial complexes in Wonsan, Nampo, Hamheung and Sinuiju.

Of course, the latest developments on the Korean Peninsula suggest that maintaining the status quo will be a challenge, not to mention building more industrial complexes. Pyongyang is sending mixed signals, with a series of missile and rocket provocations as well as a proposal to send a large team and cheering squad for the Incheon Asian Games in September. We cannot predict the future.

However, establishing joint economic zones is a long-term task, and Seoul and Pyongyang need to prepare for the future without being disturbed by daily confrontations. Just in time, the Unification Preparation Committee has been officially organized following the Korean Trust Process and the Dresden Declaration by President Park Geun-hye. Revitalization and expansion of the Kaesong Industrial Complex should be a priority task in preparation for reunification. As Seoul and Pyongyang preciously nurture and develop the Kaesong Industrial Complex together, it will be the start of recovered trust, reconciliation and cooperation.

*The author is a foreign policy and security news editor of the JoongAng Sunday.