An awkward situation for Korea

An awkward situation for Korea 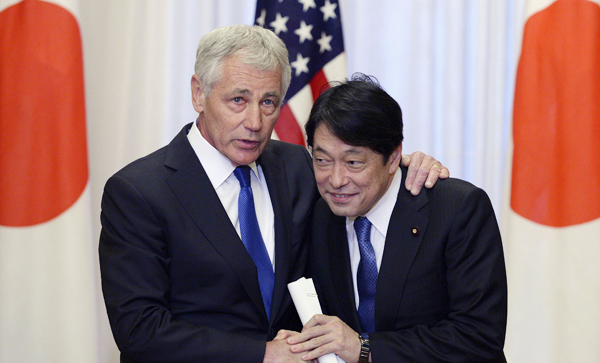 In mathematics, 1 + 1 = 2. However, in international politics, 1 + 1 does not have an answer. Often, 1 + 1 leads to a complicated scenario. Lately, Japan’s right of collective self-defense was a hot potato in Northeast Asia while the war in Iraq is the biggest issue in the Middle East. How about we combine the two? An unlikely yet most uncomfortable scenario is the awkward situation to consider sending peace-keeping troops to Iraq again while checking on Japan.

For now, the two issues are developing with no connections as far as the physical distance between Japan and Iraq. The right of collective self-defense is a card that Japan plays as it remains caught between China’s ambitious expansion and America’s claim to existing order. The chaos in Iraq originates from the bloody power struggle between the Shia and the Sunni 11 years after the collapse of the regime as the internal discord had festered under Saddam Hussein’s dictatorial rule.

Until now, the two issues haven’t been intertwined. Japanese Prime Minister Abe Shinzo said on July 1 that Japan has no intention of getting involved in Iraq. The Obama administration is prudent to avoid direct military involvement in Iraq. U.S. Republican Senator Rand Paul - named as a potential Republican front-runner for the 2016 presidential election - is one of the voices openly opposing military intervention in Iraq.

But will the two issues remain separate in the future? On July 3, U.S. Chairman of the Joint Chiefs of Staff Martin Dempsey said that Iraqi government forces don’t have the capacity to drive the Sunni rebels out on their own, and they need foreign support to retrieve the areas occupied by the insurgency. Foreign support mostly means the United States and the international community.

There is no guarantee that Japan’s role is limited to Northeast Asia. In a joint news conference with Japanese Defense Minister Itsunori Onodera on July 11, U.S. Defense Secretary Chuck Hagel welcomed Japan’s right of collective self-defense as a “historic decision.” He mentioned “ballistic missile defense, counter-proliferation, counter-piracy, peacekeeping and a wide range of military exercises” as Japan’s roles. Missile defense is in Northeast Asia and counter-piracy work would be in Southeast Asian waters and the Indian Ocean. The most urgent peacekeeping activities could be in Iraq. In 2004, Japan had sent troops to Iraq.

When the former Roh Moo-hyun administration sent the Zaytoun Unit to Erbil in Northern Iraq, Japan sent the Ground Self Defense Force to Samawah in the south.

Then, we need to calculate the impact on Korea from the combination of the war in Iraq and Japan’s right to collective self-defense. Will the United States maintain its policy to refrain from military intervention in Iraq? If it changes, will Washington demand the allies, Korea and Japan, pay the bill? Once Japan is allowed to exercise the right of collective self-defense, will it get involved in the war in Iraq? What are Korea’s options and how will the government reach a consensus among its citizens? Of course, if all these concerns turn out to be unnecessary, it would be fortunate. But it is better to be overly cautious rather than seek strategies too late after watching the flow of international politics without any plan.

*The author is a Washington correspondent for the JoongAng Ilbo.