[Sponsored Report] Hanwha helps Iraqi girl get back on her feet

[Sponsored Report] Hanwha helps Iraqi girl get back on her feet 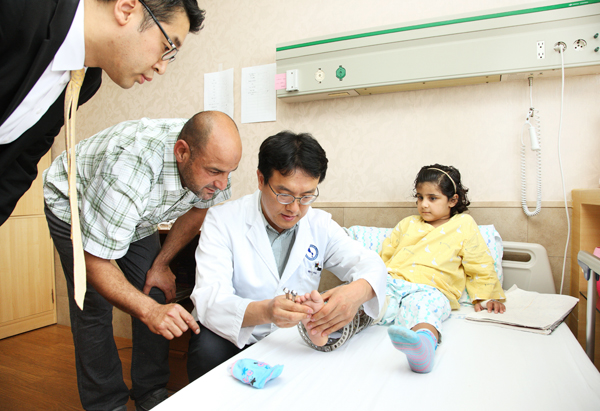 A doctor from Ajou University Hospital in Suwon, Gyeonggi, examines the foot of 5-year-old Tiba as her father, a Hanwha E&C guard supervisor for Bismayah’s new town construction project in Iraq, watches on. Provided by Hanwha E&C

A recent story of an Iraqi girl who suffered a broken leg has warmed the hearts of the country’s residents toward Korean companies.

Last November, 5-year-old Tiba Amer Alwan, the daughter of an Iraqi guard supervisor working for Hanwha Engineering and Construction (E&C) in Bismayah, suffered a broken leg when she tripped and fell while going to meet her father, who was returning from work.

Unfortunately, the wound developed an infection and Tiba had to undergo surgery four times. In the end, the illness took half of her shinbone and her family was told that her leg needed to be amputated.

When Hanwha’s officials heard about her condition last April, the company’s trade division decided to take action. The company immediately sent Tiba and her father, Amer Alwan Ibreesam, to Ajou University Hospital in Suwon, South Korea. There, she received three surgeries, which were fully financed by the company.

The damaged and infected parts of her bone were removed and restored, and she is expected to walk out of the hospital next month.

According to Cho Jae-ho, the orthopedist who performed Tiba’s operation, the surgeries were very successful.

“As she is still young, I am certain that she will be able to walk again after the new bones have regenerated,” said Cho.

Tiba’s father said he was sincerely grateful for the help.

“Thanks to Hanwha and Ajou University Hospital, my daughter could be treated in the best conditions without any concern of expenses,” he said.

Hanwha E&C is currently constructing 100,000 houses in Bismayah - the largest construction project in scale among Korean companies overseas. While working on the buildings, the company is also engaged in various activities to integrate more with the local community. Such activities are based on Hanwha Group Chairman Kim Seung-yeon’s vision of corporate responsibility philosophy: “together, further.”

“We are happy to help the daughter of Mr. Amer, our exemplary field worker,” said Moon. “We plan to continue to support Iraqi residents.”