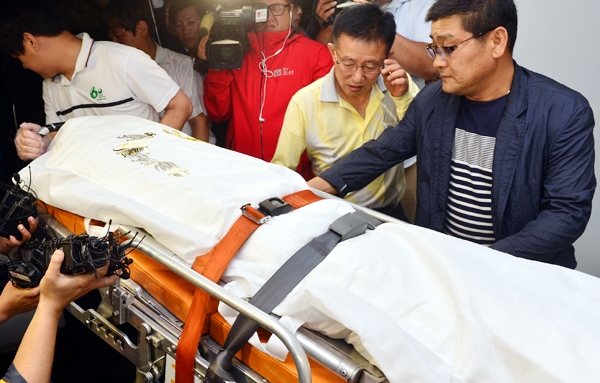 The body of Yoo Byung-eun is taken in an emergency vehicle for further investigation from a funeral hall in Suncheon, South Jeolla, to the National Forensic Service in Seoul yesterday. [NEWSIS]

The chief of Suncheon Police Precinct in South Jeolla was relieved of his duties yesterday over the 40-day delay in identifying the remains of Korea’s most wanted fugitive, Yoo Byung-eun, the patriarch of the family behind the operator of the doomed Sewol ferry.

The removal came after Suncheon Police Chief Woo Hyeong-ho took the blame at a briefing yesterday for the Suncheon Police Precinct’s inability to identify a corpse found in a field on June 12 as Yoo’s.

“The squalene container Yoo had when he was found dead was produced by an affiliate of Guwonpa [the headquarters of the Christian sect co-founded by Yoo] and we didn’t know the Korean inscription ‘Love Like a Dream’ inside the bag he carried was the title of a book of essays written by Yoo,” Woo said in the briefing.

“And we could not recognize that his clothes were a luxurious Italian brand and his shoes were expensive as well,” Woo said.

Suncheon Police believed the body found on June 12 was that of a homeless person. An extensive manhunt for Yoo was conducted in the area May 25 because Yoo was suspected to be in hiding in a villa in Suncheon.

When asked if the local police investigation was insufficient, Woo answered, “We acknowledge that it was not perfect.”

The Sewol ferry sank off the southwest coast of Korea on April 16, leaving more than 300 people dead or unaccounted for, and the prosecution and police have been pursuing Yoo since May after he was identified as the de facto owner of the ferry. 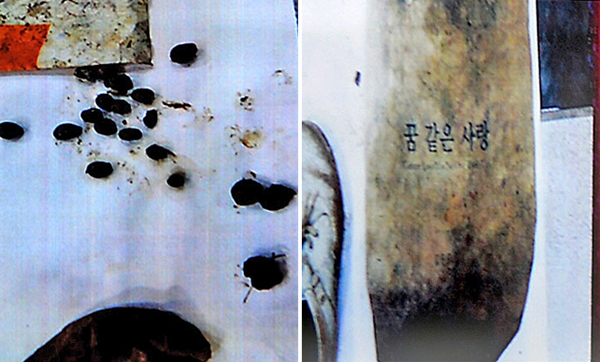 The police found beans on Yoo’s corpse (left) and a canvas bag inscribed with the phrase “Love Like a Dream.” [NEWSIS]

Prosecutors believe Yoo actually ran Chonghaejin Marine Company, the Sewol ferry’s operator, because his name was on a network of emergency contacts at the company listed as “chairman.” Chonghaejin and its management are being blamed for causing the tragic accident by remodeling the ferry to add more passenger cabins and cargo space, making it unsafe, and for overloading it the day of the tragedy. That was why prosecutors were trying to indict Yoo for involuntary manslaughter.

They also were planning to attach Yoo’s assets to pay for rescue efforts and compensation for the families of the victims. That will be hard now since Yoo cannot be tried and found guilty of being responsible for the sinking.

The prosecution, however, said it will continue to pursue Yoo’s children. The eldest son Yoo Dae-gyun is on the run in Korea, second son Yoo Hyeok-gi is in the United States and Yoo’s eldest daughter Yoo Seom-na is in France. Prosecutors have already requested extradition of the two children in foreign countries.

It is also questionable whether the 77-year-old farmer who found Yoo’s body and reported it to the police June 12 is entitled to the 500-million-won ($486,500)-reward for catching Yoo. The biggest-ever reward attracted bounty hunters to Suncheon, where Yoo had a villa, and other regions where Yoo might have headed.

“We need to check his initial report record from the police,” said a prosecutor. “If he said the body might be Yoo’s, then he may be able to receive it, but he is unlikely to receive the reward if he just said he found a dead body.”