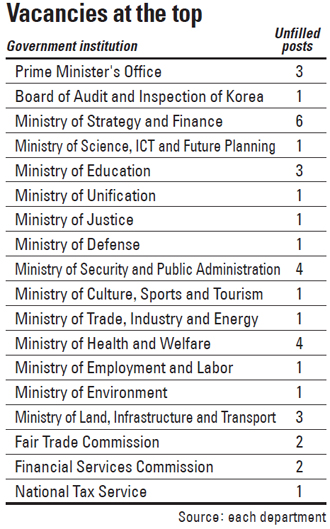 “The situation is precarious just like a dam swollen with too much water,” says a high-ranking civil servant working at the government complex in Sejong City.

He was describing the mood in Korea’s administrative capital following President Park Geun-hye vow of sweeping reforms in government appointees on May 19. In a teary address that day, the president pledged a “renovation and revolution” of the system.

Prime Minister Chung Hong-won has also said his top priority is government reform through a joint committee of the government and private sector devoted to the reforms.

The idea of sweeping reforms in the government was prompted by the sinking of the Sewol ferry on April 16, which killed over 300 people, most of them 11th graders. The ferry’s dangerous condition and even the botched rescue attempt, were blamed on corrupt connections between government watchdogs and private enterprises and the custom of giving plum jobs at watchdogs and other industry associations to former senior government employees who used to be involved with the industry.

That led to a you-scratch-my-back mentality that fostered corrupt practices in virtually all industries from nuclear power generation to the Coast Guard, which was led by former policemen with no experience at sea.

This deep-rooted collusion was considered the core cause of the Sewol tragedy and the public started complaining about Korea’s eternal, unavoidable and indestructible “gwanfia,” a portmanteau of the Korean words for gwalyo (government official) and mafia.

But vows from on high to overhaul Korea’s way of doing things seems to only be backfiring, at least at this point. A revision of the Public Service Ethics Act, which regulates re-employment of high-ranking government officials, has not been passed by the National Assembly.

Meanwhile, the government is so afraid of criticism about gwanfia issues that it has stopped promoting high- ranking civil servants. Six director positions have been kept vacant for months in the Ministry of Strategy and Finance alone and 50 such positions are vacant in the entire central government.

“I wanted to take the job of president of an affiliated industry association but it fell through in the end,” said a 56-year-old director-level civil servant in the central government. “It’s like sitting on pins and needles because I can’t quit and other people seem to be criticizing me [because I wanted that job].”

“I used to try to dissuade good government employees from taking jobs with foreign investment banks when they came calling,” a former finance minister said, “but I have no grounds to ask them to stay on in government service anymore.”

And to make matters worse, as former civil servants are no longer considered politically correct candidates for cushy jobs at public corporations or agencies, academics and even politicians are on the prowl to get those vacant seats.

Last month, 39 people applied for the presidency of Incheon International Airport Corporation, the highest number ever. A short-list of four has been drawn up, and rumor has it that the corporation has already chosen a politician from the ruling Saenuri Party.

The Korea Gas Corporation recently named four non-executive directors, including Jang Man-gyo who headed the election polling committee of the ruling Saenuri Party’s North Chungcheong chapter during the 2011 presidential election. The corporation’s labor union lashed out at the decision, claiming the government was giving Jang the job as a political reward.

The Small and Medium Business Corporation named Lee Young-ae, a former Saenuri Party lawmaker, as an auditor on June 10.

Critics are saying things will only get worse as other public institutions and enterprises begin to have vacancies. Some civil servants are considering changing careers because it’s not worth climbing the ranks if the parachute positions they counted on will not be available to them.

“Public corporations should not get stuck with incompetent former high-ranking government employees,” said Cho Dong-keun, a professor of economics at Myongji University. “But it’s even worse to fill those positions with politicians who lost elections or professors.

“The government needs to give chances to [high-ranking] government employees to work for institutions in different fields because their experience is also an asset of our society.”

But to do that, they need to establish a new system, which isn’t going too well.

The revision of the Public Service Ethics Act was submitted to the National Assembly in mid-June but hasn’t been passed yet.

“The revision should be approved as soon as possible so that we can select which public service-related organizations can hire former senior government employees,” said an official of the Ministry of Security and Public Administration. “But we can do nothing because the regulation isn’t revised yet.”

The un-revised regulation also allows public companies and the private sector to hire former senior government employees. Analysts say the gwanfia issue has become serious because the agency that is supposed to be a watchdog over such re-employment is not doing its job properly.

The Government Public Ethics Committee under the Security Ministry consists of 11 members, four from the government and seven from the private sector. But the names of members are not disclosed except for chairman Kim Hee-ok, president of Dongguk University. It does its work in secrecy.

The government says the secrecy is needed to prevent lobbying of the committee members. But the committee hardly seems to be effective: On average, it rejects only 7 percent of applications for reemployment of former high-ranking government officials.

The bill to revise the Public Service Ethics Act does not include changes to the committee.

“The Government Public Ethics Committee is not functioning properly,” said Lee Jong-su, a professor of public administration at Yonsei University. “Authorities should guarantee the independence of the committee and strengthen the roles of its members.”