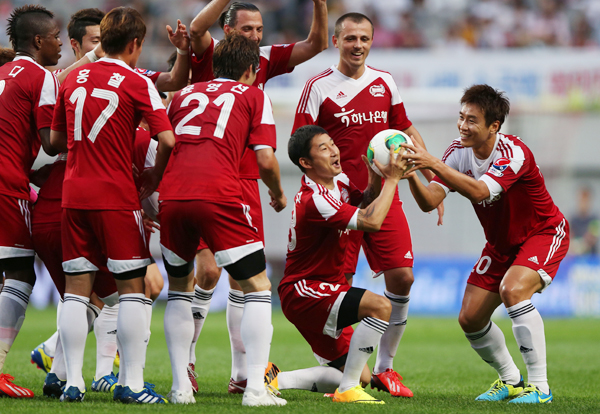 K-League Classic players including Lee Chun-soo, holding the ball on the left, and Lee Dong-gook, right, practice a group goal ceremony during the 2013 All-Star Game at World Cup Stadium in Seoul. Provided by the K-League

Ahead of the 2014 K-League Classic All-Star Game which kicks off tomorrow at 8 p.m., fans can attend an autograph signing, and a quiz and concert will be held during the game at Seoul World Cup Stadium in Sangam-dong, western Seoul.

In this year’s match, Team Park Ji-sung will face off against the K-League All-Star Team to commemorate the retired footballer’s successful 25-year career.

The highlight of the halftime show will be the revival of a relay that hasn’t been held since 2007. In that relay, a player from each club teamed up with coaching staff and fans to race against other K-League teams. Last time, the Jeonbuk Hyundai Motors came in first.

The league said fans may get a surprise gift from the field. When a player scores, he will toss the ball into the crowd for a lucky fan to catch. The football that will be used is the Brazuca, the official ball of the Brazil World Cup.

There will also be promotional events held before and after the game. Star players such as Park Ji-sung, Lee Young-pyo (a former Tottenham Hotspur defender), Lee Keun-ho (Sangju Sangmu Phoenix), Cha Du-ri (FC Seoul), Kim Shin-wook (Ulsan Hyundai), Kim Seung-gyu (Ulsan Hyundai), Lee Dong-gook (Jeonbuk Hyundai) and Yeom Ki-hoon (Suwon Samsung) will be available for autographs outside the stadium at 6:20 p.m. But each player will only give 100 autographs, so fans who want in on the action should arrive early. The league said it will begin handing out numbered tickets for autographs at 5 p.m.

On July 16, to promote the All-Star Game, Lee Keun-ho started driving a tractor from Sangju, North Gyeongsang, where Sangju Phoenix plays, to World Cup Stadium with his uniform on. Photos of Lee driving the tractor on a road in Eumseong County, North Chungcheong, were posted on social media sites on Monday. The tractor is set to be displayed outside the stadium before the match, though some fans are concerned that Lee might not even arrive on time.

Before kick-off, comedian Cho Se-ho will entertain the crowd with games and a quiz. Fans who answer questions correctly could win gifts such as Beats headphones by Dr. Dre, an Ice Watch or 100 soccer balls. K-pop boy band Beast will perform after the game.

Coaches in the K-League will referee the All-Star match. Chunnam Dragons Coach Ha Seok-ju will be head referee for the first half and Coach Choi Yong-soo of FC Seoul will take over in the second half. Coach Kim Bong-gil (Incheon United), Cho Min-kook (Ulsan Hyundai), Lee Sang-yon (Seongnam FC) and Park Kyung-hoon (Jeju United) will be assistant referees.

The members of Team Park Ji-sung are all players with whom he grew close to over his career. Selected along with Lee Young-pyo were Chong Tae-se (Suwon Samsung), retired Japanese football star Miyamoto Tsuneyasu and players who took the field with Park in the 2002 World Cup, including Lee Chun-soo (Incheon United) goalkeeper Kim Byung-ji and Hyun Young-min (Chunnam Dragons). The league added five members to Park’s team yesterday, including Kim Eun-jung (Daejeon Citizens) and Kang Soo-il (Pohang Steelers).

Those who want to attend the All-Star Game can purchase tickets on Ticketlink’s website (www.ticketlink.co.kr) until 4 p.m. on the day of the event.