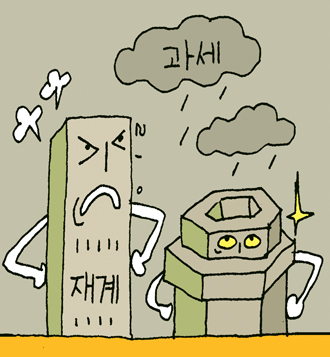 The local business sector and stock market is abuzz over the new finance minister’s hint of a punitive tax on large companies sitting on piles of cash reserves. Alternatively, the government might come up with some incentives to force those companies to use their cash to make investments, increase hiring, boost salaries, or step up dividends. Choi Kyung-hwan, the finance minister and also deputy prime minister in charge of the economy, said the idea was to put a little spark into lackluster domestic demand.

Companies, unsurprisingly, are against the plan. They argue that a large share of after-tax cash reserves on their balance sheets has been set aside for facilities and property investment. If they use their savings to pay dividends, they won’t have any money left to invest in the future. Moreover, they claim, paying more dividends will do little to increase household incomes and spending in general as more than half of the shareholders who would get the dividends are foreign investors. Their savings would go overseas! That reasoning is understandable. The government’s idea is, in fact, mostly rhetoric to encourage more capital investment as it doesn’t have any legal means to interfere with what companies do with their money.

But investors think differently. Listed companies have been sitting on mountains of cash reserves, neither increasing dividends nor investments. That devalued Korean equities, generating a dull market. Only Samsung Group and Hyundai Group units saved face for Korean stocks.

Listed companies’ reserves doubled over the last five years to reach 500 trillion won (488.4 billion) and cash flow tripled to 200 trillion won, according to one asset management company. Their riches came from the pockets of investors. The government cut corporate taxes and supported exporters through its policies, despite protests. The stock market put up with its humiliating reputation of being a cheap market. Companies are now richer than ever and yet they complain they have nowhere to put their investment. Then why not return them to their own investors?

Dividend payouts by domestic companies are pitiful. Little is given out to common shareholders. Just 15 percent of last year’s net profit was returned to shareholders, a return ratio against a stock accounting for a meager 1.1 percent. Multinational companies have been increasing dividend returns as a token of appreciation to shareholders for believing in them in the aftermath of the global financial crisis. Shareholders do not allow companies to pile up cash savings with no better plans. Dividend payout ratios for German listed companies, which were 37 percent, shot up to 48 percent. They returned half of their net earnings to shareholders. The dividend-price ratio on the German bourse reached 3 percent, double the yield of 1.3 percent on a 10-year German government bond. That is the secret behind the German Stock Index DAX’s surge to a record-high 10,000 points in early July.

Americans offer similar benefits. The New York stock market’s dividend-price ratio is around 2.3 percent and the payout ratio in the form of dividends is 35 percent. American companies throw in other attractive benefits for their shareholders: stock repurchases, which help to boost the stock’s value. Over the last year, American -listed companies spent an all-time record $500 billion to buy back their shares, up 30 percent from the previous year. As a result, American investors get about 5 percent returns on their stock investments compared to an annual 2.5 percent yield on 10-year Treasury notes. It’s no wonder the American stock market is doing well.

The Korean stock market is predicted to yield a dividend-price ratio of 1.25 percent this year, the lowest among both developed and emerging markets and even behind China’s 3.6 percent, Indonesia’s 2.0 percent, India’s 1.6 percent and the Philippines’ 2.1 percent. The poor dividend return is part of the reason the Korea’s benchmark stock price index has been stuck in the range of 1,700 and 2,000 points for years.

Companies should increase dividends, plain and simple. Analysts estimate the Kospi could reach as high as 2,400 points this year. Customers are asking about funds that offer dividends. Some companies say they cannot bolster dividends because that will mostly benefit foreign investors. But foreign or not, they are investors. A company making such an excuse does not deserve to call itself a global entity. If they do not return cash to investors, companies should get going on mergers and acquisitions or do more research and development. Shareholders want action. The economy runs on confidence. Dividends could bring that to the Seoul bourse.