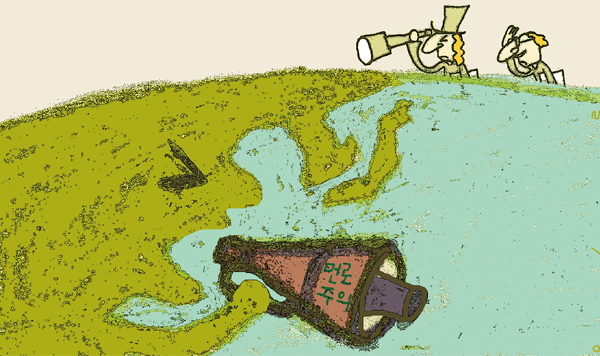 Chinese President Xi Jinping has completed a four-nation tour of South America. In order to allow Xi, a football fan, to attend the World Cup final, Brazilian President Dilma Rousseff initially scheduled the sixth BRICS summit right after the World Cup. However, Xi turned down the offer and focused on work instead. At the summit, Brazil, Russia, India, China and South Africa agreed to establish a new development bank, the equivalent of a World Bank for the BRICs members, openly challenging the U.S.-led financial order.

Also, China will be supplied iron ore from Brazil in exchange for a $7 billion loan, beans from Argentina for an $8 billion loan and petroleum from Venezuela for a $13 billion loan. Especially to Argentina, whose economy is struggling, Xi offered a generous loan. He flew to Cuba, which China calls a “good friend, good comrade and good brother,” and showed off the friendship between two of the world’s last remaining socialist states.

For nine days, the Chinese president freely navigated South America, traditionally and geographically in the U.S. sphere of influence. But that can be seen as a response to U.S. President Barack Obama’s tour of four Asian countries in April. When Obama was in Japan, he infuriated Beijing by saying the U.S.-Japan Security Agreement applies to the disputed Senkaku, or Diaoyu Islands.

Based on the Monroe doctrine, South America is considered the backyard of the United States. In 1823, U.S. President James Monroe developed the doctrine to discourage European interference in Latin America. Latin American countries initially welcomed it.

But U.S. interference eventually replaced that of Europe. President Theodore Roosevelt claimed the United States should exercise international policing authority in the Americas.

As the politics and economies of Latin America fell under the influence of the United States, the Monroe Doctrine became a synonym for American hegemony.

However, hegemony is always bound to generate resistance. The prescription of neoliberal reform for struggling South American economies failed, and leftist regimes took power in many Latin American countries. The George W. Bush administration neglected South America while focusing on its anti-terrorism campaign after the Sept. 11 attacks, and America’s economic capacity notably weakened after the 2008 financial crisis. Such conditions deepened and these factors fanned anti-American voices in South America.

The most significant result was the establishment of CEALC, the Community of Latin American and Caribbean States, in 2011. The trans-American organization, which excludes Washington, is dedicated to protecting political and economic security by bringing together Central and South American countries. The target is obviously the United States. CEALC practically nullified the Monroe Doctrine. In November 2013, U.S. Secretary of State John Kerry declared “the era of the Monroe Doctrine is over,” and it was rather too late.

The Chinese Monroe Doctrine reemerged in May after the Conference on Interaction and Confidence-Building Measures in Asia (CICA) meeting in Shanghai. Xi proclaimed “Asia for Asians,” a reminder of the claim Washington used in reference to South American nations, “Americas by Americans.” Just as the United States advocated Americas by Americans in order to drive Europe out of South America, Americans believe China is trying to remove America’s influence from Asia with its “Asia for Asians” assertion.

China is not feeling comfortable and strikes back, saying the United States is judging others based on its own history. “Only the officials are allowed to set fires, but common citizens are not permitted to light their lamps.” The one who committed wrongdoing does not allow others to exercise just rights, China argues. And China claims that it would never pursue hegemony.

For now, the United States doubts China’s intentions, and China argues that America’s suspicion is groundless. History will determine which side is right.

But China must remember one thing. In the end, a distorted Monroe Doctrine led to anti-American sentiment in South American countries. China’s “Asia by Asians” idea should not lose its original spirit.