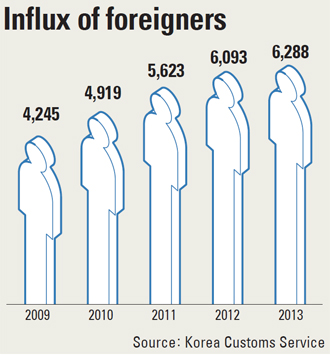 As the Korean economy evolves, changes are being seen in the nationalities of expats coming to the country and even the cars they bring.

According to a report by the Korea Customs Service released yesterday, the number of foreigners moving to Korea jumped to 6,288 last year, 48 percent higher than the 4,245 who arrived in 2009.

The growth was led by Chinese and Canadians, the report showed.

There was no great change in the number of incoming Americans or Japanese.

During the same period, vehicles brought in by foreigners surged 80 percent to 274 last year from 152 in 2009.

The government agency said foreigners were most likely to own Korean cars these days because of free trade agreements signed by Seoul with many nations.

The growing number of foreigners coming to live in Korea was credited to the expansion of foreign business branches in Seoul and establishment of international organization headquarters such as the Green Climate Fund.

“Such changes in customs statistics reflect improvements in the country’s international status and image,” an official at the customs agency said. “The increased number of foreigners stemmed from the country’s bigger role on the international stage, while the drop in foreign cars indicate the improved quality of Korean cars.”