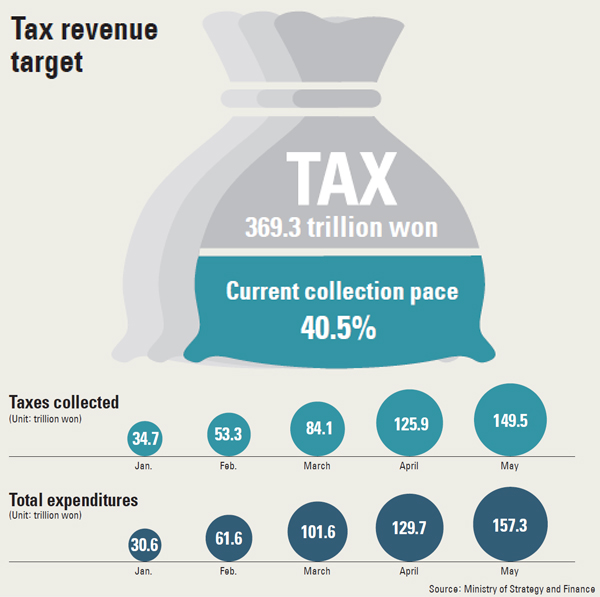 Amid high expectations for a huge economic stimulus package to be revealed today, some critics raise concerns about the slower-than-forecast pace of tax collections this year and call for an increase in tax rates.

According to a report by the Ministry of Strategy and Finance, the government collected 149.5 trillion won ($146 billion) from January through May, accounting for 40.5 percent of the 2014 target of 369.3 trillion won.

The collection rate is 0.7 percentage point behind the pace in 2013, when the government ended up with a 8.5 trillion won shortfall.

As of May, the nation’s fiscal deficit stood at 23.8 trillion won.

Considering the current performance, it is estimated the government won’t be able to avoid a substantial shortfall in tax revenue this year, too.

The January-May tax collection rate should be about 46 percent.

Shortfalls in tax revenue could cause a cut in government spending, which would affect a stimulus plan.

Total 2014 spending stood at 157.3 trillion won as of May, outpacing taxes collected, the report showed.

Worries about fiscal soundness are growing after Finance Minister Choi Kyung-hwan pledged to bolster the economic recovery with 30 trillion won to 40 trillion won in support this year and expand the budget next year.

Meanwhile, Choi mentioned Japan’s two lost decades yesterday for the fourth time since he became minister to highlight the seriousness of the economic situation and build support for expansionary measures.

In a meeting with lawmakers, the minister proposed a larger government budget and increased expenditures to stimulate the economy and domestic demand.

“The economy needs one powerful punch,” Choi said. “Since the economy is still healthy in terms of fiscal soundness, the government has room to increase spending. The government will pursue measures to secure financial health in the short term.”

The minister emphasized it is more urgent to revitalize the economy than maintain financial health.

“It is right to risk short-term fiscal aggravation and focus efforts on boosting the economy,” said Lee Jun-hyup, a research fellow at Hyundai Research Institute. “But considering the current tax revenue pace, at some point the government will be in desperate need of a supplementary budget to plug the hole in tax revenue.”

Some analysts say it will be impossible to prevent a tax shortfall without raising rates.

The National Tax Service plans an all-out effort to uncover hidden sources of revenue the rest of the year.

“The value-added tax will be a key factor that will determine total tax revenue,” said Kim Duk-joong, a commissioner of the National Tax Service, in a meeting this month.

Yet there are wide differences of opinion over what rates should be raised.

“Corporate tax revenue declined due to the former government’s incentives for businesses,” said an analyst at a private think tank. “So rather than the VAT, it is right to push for increasing the corporate tax rate.”