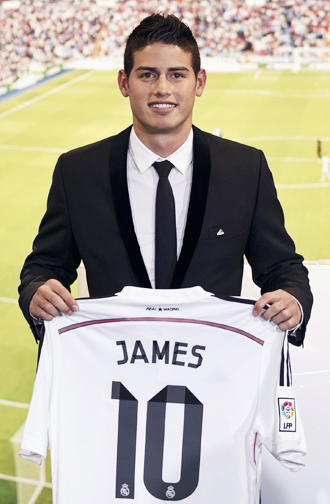 A week after finishing the World Cup as the tournament’s top scorer with six goals, Colombia forward James Rodriguez signed a six-year deal with Real Madrid on Tuesday.

The 23-year-old Rodriguez, who helped Colombia reach the quarterfinals in Brazil, passed a medical examination at the Sanitas Clinic in the northern suburb of La Moraleja.

“I’m very happy,” Rodriguez said as he left the clinic. “Everything went well.’’

In the afternoon, he was presented to thousands of cheering fans at the Santiago Bernabeu Stadium. Many wore Colombian national colors and waved flags.

Madrid President Florentino Perez welcomed the forward and referred to him as James - which he pronounced in the Spanish style as “ha-mes” - Rodriguez.

Perez said Alfredo Di Stefano, the late Madrid great and honorary president, also had come to the club from Colombia.

“Colombia will be at your side,” said Perez, raising a loud cheer from fans in the stadium.

Spanish sports newspapers reported that Madrid had agreed to pay French club Monaco 80 million euros ($108 million) for Rodriguez. He is expected to join the squad Aug. 1.

Rodriguez’s goal against Uruguay in the second round of the World Cup, when he chested the ball down and then volleyed it in, was voted the best goal of the tournament.

“I think they [Madrid] were interested in me before my goal against Uruguay,’’ Rodriguez said. “But by scoring that goal I enhanced my chances of coming here.’’

The forward said he was aware of Madrid’s depth, adding that he was ready to play different positions if required to do so by the coach.

“I just want to train hard and be in good condition for when I am called upon to play,’’ he said.

The Colombia forward will wear the No. 10 shirt, vacated when Mesut Ozil left Madrid for Arsenal. The shirt is inscribed with just “James’’ above the number.

Asked if he had heard rumors that fellow countryman Radamel Falcao might also be headed for Madrid, Rodriguez said Falcao is a great player.