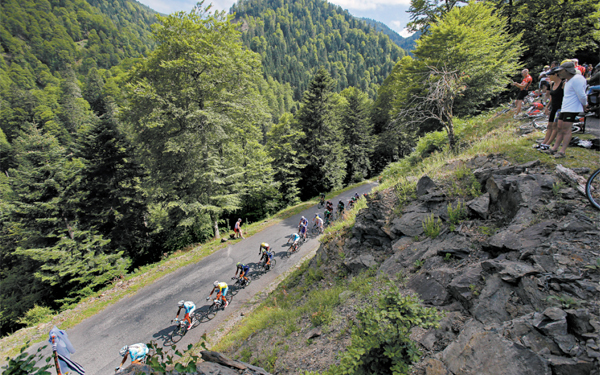 Italy’s Vincenzo Nibali and the pack climb Port de Bales pass during the 16th stage of the Tour de France on Tuesday. The stage is 237.5 kilometers (147.6 miles), starting in Carcassonne and finishing in Bagneres-de-Luchon. The world’s most famous cycling race will end Sunday in Paris. [AP/NEWSIS]

Riding in his 10th Tour de France, three-time world champion Michael Rogers of Australia finally got his first stage victory in cycling’s greatest race on Tuesday by leading a breakaway group to a downhill finish as the pack entered the Pyrenees.

Italy’s Vincenzo Nibali, finishing about 8.5 minutes back, reined in his top challengers and retained the yellow jersey after Stage 16, the longest stage of this year’s race and the first of three days in the mountains on France’s border with Spain.

Behind the Italian, the contest for podium places was shaken up: Thibaut Pinot of France rose to third in the standings, while compatriot Romain Bardet dropped to fifth. Tejay van Garderen of the United States lost more than 3 1/2 minutes, slipping from fifth to sixth and seeing his podium hopes dealt a serious blow.

Rogers took a bow as he crossed the line alone after the 237.5-kilometer (147-mile) leg from Carcassonne to Bagneres-de-Luchon, which featured a tough climb up the mountain pass of Port de Bales.

“Every cyclist’s dream is to win a stage at the Tour de France,’’ said Rogers, who finished nine seconds ahead of France’s Thomas Voeckler - who had won two previous Tour stages at Bagneres-de-Luchon in 2010 and 2012. “I can’t describe the joy I felt in the last 500 meters ... I hope I don’t have to wait another 10 years to experience it again.’’

Rogers came close to not riding on this Tour for the Tinkoff-Saxo Bank team.

In a ruling in April, the International Cycling Union accepted that meat Rogers ate in China last year probably caused his positive doping test at the Japan Cup shortly afterward.

Rogers said he might not have had the opportunity to win a stage if Contador - his team leader, who crashed out in Stage 10 - were still racing because his job would have been more of a support rider.

Now that the Spaniard is out, the team came up with a plan B: to try for stage wins.