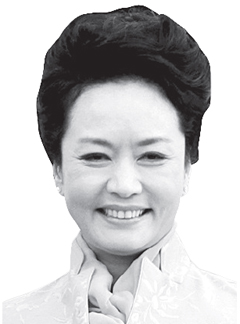 Ever since Peng Liyuan, the first lady of China, visited Seoul with her husband, President Xi Jinping, earlier this month and stopped by a shopping mall in Dongdaemun, store owners there have been celebrating surging sales as Chinese customers continue to pour in.

On the night of July 3, Peng took a trip to Lotte Fitin, a recently opened shopping mall in Dongdaemun in central Seoul, where she walked into four stores and bought various items, including a hairpin. Although the first lady strolled around the mall for just 20 minutes, the impact of her visit has been huge. Lotte Fitin has become a must-visit destination for Chinese tourists.

Peng is a famous singer in China and has become even more popular as first lady by being active in diplomatic activities.

According to industry sources, average sales at the four stores that Peng visited jumped by more than 40 percent in the two weeks after she came, compared to the two weeks before her visit. In the first week of July, total sales at the handicraft accessory store where Peng bought a hairpin were higher than the store’s sales for the entire previous month. The yakgwa (Korean traditional cookie) shop that the Chinese first lady visited now sells about 200 cookies every day, when it used to sell about 50 a month.

“So far this month, sales from foreigners jumped 250 percent compared to the same period last year,” said Lim Hyung-wook, an official from Lotte Asset Development. “We will work hard to maintain the popularity of the mall after Peng’s visit.”

To bring in more customers, Lotte said it will start a special event for Chinese tourists tomorrow. On the second basement floor of the shopping mall, Lotte Fitin will set up an exhibition of 17 photos of Peng. The mall will also sell 100 sets of the four items that Peng bought during her visit, including gochujang (Korean chili paste), yakgwa, yugwa (traditional whole-grain crackers) and a hair pin. The items will be put in a Chinese traditional lucky bag.

“We have also designated China Week from the third to ninth of each every month, when we will hold events for Chinese tourists,” said an official from Lotte Fitin.