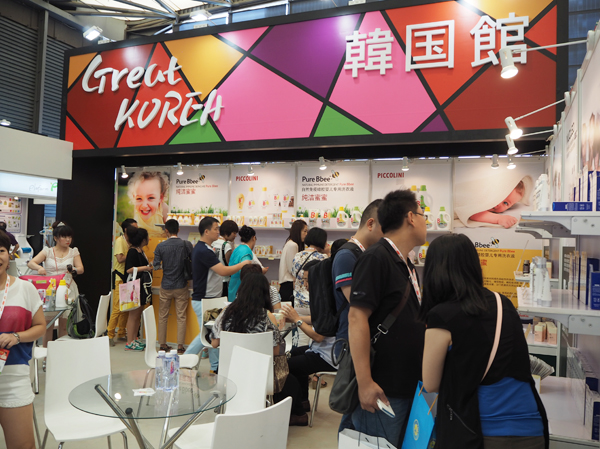 SHANGHAI - Education I Corporation, a Korean company that makes kitchenware for children, plans to set up its first business overseas next month, and it has decided to head to China.

Three years ago, the Hanam, Gyeonggi-based company, which estimates it will make about 10 billion won ($9.76 million) in revenue this year, opened a sales office in Hong Kong, but CEO Kim Mi-jin said it was just a stepping stone to reach the market in mainland China.

“The Korean children’s products market has reached a plateau and we think we can carve out a new promising market in China,” Kim said.

Wary of the maturing domestic market and buffeted by the declining birthrate, Korean manufacturers of baby goods are eyeing the fast-growing market in the world’s most populous country.

The trend was visible at the 14th annual Shanghai International Children Baby Maternity Industry Expo 2014, the biggest of its kind in China, which featured a Korea Pavilion for the first time.

A total of 23 Korean companies, including Education I Corporation, set up 49 booths in the pavilion inside the Shanghai New International Expo Centre to pitch their products to hundreds of thousands of Chinese consumers during the three-day event that started Tuesday.

The Korea International Trade Association (KITA) helped the Korean companies by establishing the Korea Pavilion and securing buyers in hopes the manufacturers could break into the Chinese children’s market. The foray into the market, KITA hopes, will establish a new generation of Chinese who are loyal to made-in-Korea brands.

China’s market appeals to all vendors for its sheer size, but maternity products, in particular, are promising due to the implementation of the two-child policy early this year.

Under the one-child policy, the market for kids’ items in China was estimated to grow at least 15 percent every year. But, with the new policy, 3 to 9 percent more annual growth is expected. Analysts predict it will grow to 600 billion yuan ($96.7 billion) in 2018, 2.3 times the 2013 market size.

Makers of children’s goods worldwide have closely watched the Chinese market for signs that parents are becoming more interested in their kids. The “Little Emperor Generation,” or the Chinese born in the 1980s or after, has been a huge drain on the household budget. The average monthly household spending on children’s products last year was $153, compared with $147 two years earlier, according to research from AC Nielsen and UBM China. There are more than 40,000 stores that specialize in children’s products in China.

“Up until two years ago or last year, people coming here were mostly buyers. But this year, I see a lot of Chinese parents carrying their babies in a stroller,” Lee Keun-pyo, CEO of BeFe, a Korean distributor and promoter of baby products, said at the expo.

Lee, who brought more than a dozen of BeFe’s partner companies to the expo this year, said the affiliates wanted to begin making a strong impact in the Chinese market this year.

One of those companies, Lee Saem, was named one of the six best product exhibitors at the expo this year for its safe elastic baby bath tub. The company already sells 80 percent of its products overseas and will put more focus on the Chinese market, said Lee Jun-hyeon, a director of the Seocho-dong, Seoul-based company.

Korean makers of baby items are hoping that the Korea-China free trade agreement will be signed soon because it will significantly enhance their price competitiveness in China.

After presidents Park Geun-hye and Xi Jinping agreed to speed up FTA negotiations during a summit early this month, the stock prices of leading local baby goods manufacturers, such as Agabang & Company and Boryung Medience, were up for several days.

Chinese parents’ preference for foreign brands, in particular since the powered milk scandal in 2008, has also worked in Korean brands’ favor, a KITA official said.

But it remains to be seen whether Korean baby brands, like many other industries, will be able to live up to the standards of Chinese consumers for years to come.

In China’s powered baby milk market, for instance, imports have jumped an average of 35.8 percent per year since 2008 to $1.5 billion last year. But the market is being led by Mead Johnson of the United States, Dumex of the Netherlands and Wyeth of Switzerland, which made up 35 percent of the market in 2012. Korea lagged behind at No. 8 with exports to China worth $53 million.

Margaret Ma-Connolly, managing director of UBM China, which organized the expo, said Korean companies’ strategies must focus on the areas where they can do better than global rivals, such as nutrition and baby car seats.

Korean companies will also have to deal with the strengthening government regulations on the country’s imports. The number of Korean exports that did not pass customs clearance increased 13 percent in the first five months of this year compared with the same period last year, KITA said.

“It takes eight or nine months for our products to get an endorsement from the Chinese authorities, but by the time it gets endorsed, the new product may have lost its appeal,” said Lee Han-joon, an assistant manager of Trusmetics Corporation, a maker of baby cleansers and shampoos.

The Korean government is planning to provide more assistance to companies that are knocking on China’s door. Next year, the number of Korean booths could be double this year’s, a senior KITA official said. But compared with other countries, Korea’s presence is still minimal, he said.