To escape the sizzling summer heat in Pyongyang, its citizens gather at the most popular seasonal hot spot, the newly renovated Munsu Water Park.

Also known as Pyongyang’s Alpamare after the Swiss resort, the large-scale state-run water amusement park was often frequented by North Korean leader Kim Jong-un during vacations when he was a teenager. As an adolescent, the future strongman attended boarding school over six years in Switzerland.

Located on the banks of the Daedong River, the waterpark first opened in 1994 but under Kim Jong-un’s command early last year, it underwent major remodeling.

Construction work on the project was initially delayed, despite a reopening set for last summer. Instead, the newly renovated recreational facility opened up slightly later, in the fall, and saw its first rush of visitors this summer.

Kim was hands-on with the project and even personally visited the construction site seven times.

“Like a fanciful water palace, the Munsu Water Park is overflowing with people’s joy, happiness and the sound of laughter,” North Korea’s state-run media stated. 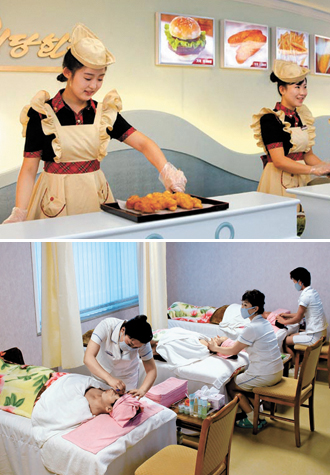 A color pamphlet of the waterpark obtained by the JoongAng Ilbo shows a remodeled facility that exceeds expectations, blatant propaganda aside.

The park is built on 158,000 square meters (39 acres) of land and boasts a 60 meter (196 feet) by 80 meter water slide. The complex also offers a variety of sports and recreational options - with indoor and outdoor pools and cafes - in a complete turnaround from the previous park.

Halter-neck one-piece swimming suits and dresses appear to be the latest summer fashions among Pyongyang ladies, possibly an indicator that bikinis may trend in the near future.

Pyongyang’s elite in need of a little pampering can check out the hair salon and skincare spa, where even a few men indulge.

Visitors can also test out the artificial rock climbing wall, the fitness center and the bowling alleys.

But perhaps most eye-catching is the Western-style fast food restaurant where the female clerks wear uniforms with frilly aprons, plaid sashes and matching caps. The joint sells hamburgers, French fries, hot dogs and fried chicken, and the girls handling the food wear hygienic vinyl gloves. Some even wear face masks in a step away from the past.

There’s a bar, too, with draft beer poured on the spot.

The libations are especially popular among the male clientele, who can be seen in their swimming trunks lounging around, sipping on glasses of Daedong River beer. 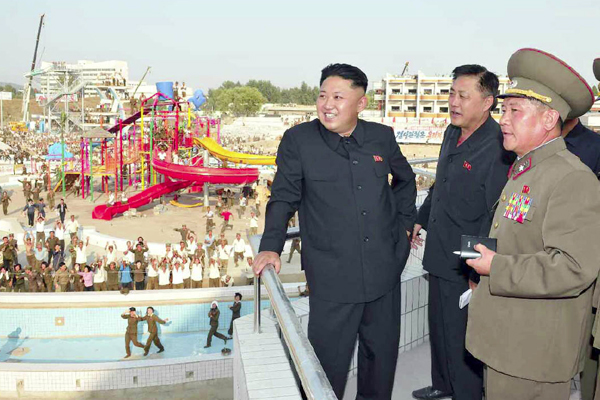 Kim Jong-un takes a look around the Munsu Water Park under renovation in a photo published in Rodong Shinmun in September 2013. [JoongAng Ilbo]

Indeed, for the privileged classes in North Korea, it appears life is sweet. Of the country’s 24 million people, about 3 million live in Pyongyang, its capital, though such luxuries seem solely intended for the nearly 4 million in the Workers’ Party.

A few international trends have caught on in the Communist north, specifically among the elite. Though, for the rest of the country, the day when they will be able to enjoy the wealth and prosperity of socialism is still but a distant dream.

Following the 2014 World Cup Games in Brazil, which were broadcast with a slight delay in North Korea, the “chicken and beer” culture popular in South Korea seems to have made progress in Pyongyang. But these changes in the country’s recreational trends were anticipated when the young Kim succeeded his late father.

In July 2012, in his first year at the helm, Kim publicly debuted his wife, Ri Sol-ju, as his first lady. They were documented enjoying a performance featuring Mickey Mouse and other unauthorized Disney characters, as well as Moranbong Band singers in short miniskirts - also a far cry from the past.

Similarly, there has been word that shopping carts and self-checkout aisles now feature in supermarkets in Pyongyang. And an electronic card can be used to gather points.

Workers in North Korea earn a monthly average wage of 3,000 North Korean won, which is equivalent to around $20. However, illegal dollar traders charge about 7,300 won to the dollar.

But more than the changes themselves, South Korean and U.S. sources are particularly paying attention to where North Korea is getting the money to purchase its special equipment and finance its large-scale construction projects despite the sanctions imposed on the country by the United Nations.

The South Korean government worries that North Korea has unknown cash routes and that there could be a loophole within the sanctions.

Yet amid large-scale construction work on the Masikryong ski resort, the water park and a new high-rise apartment complex, the livelihoods of the people are suffering.

“It is our party’s resolute determination to let our people, who are the best in the world - our people who have overcome all obstacles and ordeals to uphold the party faithfully - not tighten their belts again and enjoy the wealth and prosperity of socialism as much as they like,” Kim Jong-un said in a public speech in April 2012 in Pyongyang.

North Korea’s defense budget last year was 16 percent of the total national budget, though including the hidden defense budget it is estimated to be about 30 percent. It decreased this April to 15.9 percent, down just a 0.1 percent.

Conventional weapons and other arms expenses have decreased drastically due to its nuclear development program, and no funding appears to be going toward the well-being of North Korea’s regular citizens.

Pyongyang also appears to be trying to pass the cost of sending its large cheerleading squad of some 350 for the upcoming Incheon Asian Games in September to South Korea.

For the 2002 Busan Asian Games, South Korea put forth 1.35 billion won of taxpayer money toward North Korea. Of that, 483 million won went to housing Pyongyang’s 288-member cheerleading squad. It remains to be seen how Seoul will respond to Pyongyang’s request this year.