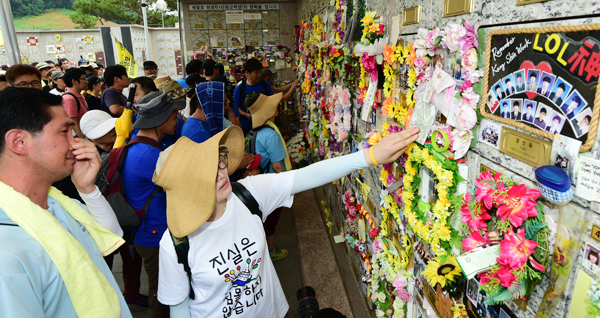 Relatives of victims of the Sewol accident visit Haneul Park yesterday in Ansan, Gyeonggi, where the victims are memorialized. Relatives of the victims embarked yesterday on a march from the memorial in Ansan and will arrive today at the National Assembly in Yeouido and Gwanghwamun Square in central Seoul. [NEWSIS]

The New Politics Alliance for Democracy stepped up its criticism of the ruling party and the Park Geun-hye administration ahead of the July 30 by-elections, and in the wake of the belated discovery of the corpse of Yoo Byung-eun, the most wanted man in Korea since the sinking of the ferry Sewol on April 16.

Commemorating the 100-day anniversary of the ferry disaster that killed more than 300 people, lawmakers from the main opposition party joined a two-day march with relatives of the victims yesterday starting from Ansan, Gyeonggi, where a joint mourning altar for casualties is installed, to Gwanghwamun Square in central Seoul.

The NPAD members’ speeches during the parade focused on an assembly-led probe into the botched manhunt for Yoo, whose body was found in an orchard in South Jeolla on June 12 but was not identified for 40 days.

“I have never seen this kind of mystery in my life,” Woo Yoon-keun, an NPAD leader said during the march. “Before investigating the cause of the ferry disaster, we should first resolve the suspicions surrounding the discovery of Yoo’s body.”

Rep. Lee Sang-min, chairman of the Legislation and Judiciary Committee of the National Assembly, said, “At all costs, I will hold a meeting of the legislation committee tomorrow, on the 100 days of the sinking, to figure out the truth and whether there was any manipulation [of the probe by police and prosecution].”

Another NPAD leader, Park Beom-kye, pointed out that just hours before police were notified of the result of a DNA test on Yoo’s body Monday night, they requested a local court to reissue an arrest warrant for Yoo.

On the same day, Justice Minister Hwang Kyo-an vowed to “make full-scale efforts” to arrest Yoo, which Park said showed the incompetence of the government.

“It is a collapse of the nation’s entire system,” Park said in a radio interview. “On the day when police received the DNA test report, the Justice Minister said at an assembly hearing that he will do his best to arrest Yoo.”

Other NPAD leaders exhorted the ruling party to agree on a special law giving strong powers to a new fact-finding committee to investigate the root causes of the Sewol sinking.

The opposition says the committee will need strong powers, including the authority to raid sites and indict suspects in order to get to the bottom of the accident - and relatives of the ferry victims have agreed.

The ruling party says they can’t give such powers to mere civilians.

Both parties had talks on Tuesday and yesterday over the issue, but they failed to bridge their differences as of press time.

Concerns mounted in the ruling Saenuri Party over the police’s embarrassing announcement about the discovery of Yoo’s body ahead of the July by-elections.

Some ruling party members told the JoongAng Ilbo they were struggling to deal with rumors and doubts about the police announcement.

“This is not helpful for us ahead of the elections,” an inner-circle member of the ruling party told the JoongAng Ilbo. “On the Internet, rumors are already spreading [about conspiracy theories around Yoo’s death].

“There could be more demands [from the opposition] for investigative authority [for the committee], saying they can’t trust the prosecution or police anymore.”

Saenuri Party Chairman Kim Moo-sung continued to criticize police and investigators, not the Park Geun-hye administration, and asked the government to deal with rumors on the Internet.

“We should clearly reveal the truth regarding the discovery of Yoo’s body,” Kim said at a party meeting yesterday. “The government should make more efforts to resolve suspicions about Yoo’s death that are spreading on the Internet.”

In the midst of rising criticism of the police, National Police Agency Chief Lee Sung-han visited the Blue House Tuesday.

A Blue House official told reporters yesterday that Kim Ki-choon, President Park Geun-hye’s chief of staff, called the police chief to the Blue House for unknown reasons. There was no announcement of the chief’s resignation or any comment from the president on the issue.

Approval ratings for some NPAD candidates in the July races have climbed, according to a joint poll by the JoongAng Ilbo and Macromillembrain, a survey company.

The poll, which surveyed 700 eligible voters between Sunday and yesterday, showed that Sohn Hak-kyu, an NPAD candidate running in Suwon C District, Gyeonggi, had higher ratings, rising from 34.7 percent the week before to 37.5 percent.

His rival, the Saenuri’s Kim Yong-nam dropped from 36.1 percent to 34.3 percent.

In Suwon D District, NPAD’s Park Kwang-on jumped from 21.5 percent to 29.6 percent against the Saenuri Party’s Yim Tae-hee, who climbed from 33.7 percent to 34.3 percent.