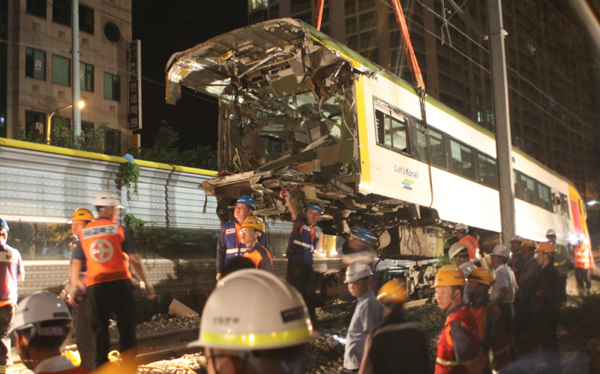 Korail workers move parts of the wreck of the Mugunghwa train yesterday following a collision that killed one woman. The tourist O-Train on Tuesday collided head-on between two stations in Gangwon. [NEWSIS]

The conductor of a tourist train that collided head-on with another train in Gangwon, which killed one passenger and injured almost all on both trains, admitted he missed a stop signal.

Around 5:50 p.m. on Tuesday, the so-called O-Train that plies a scenic route for tourists collided head-on with the Mugunghwa, a regular passenger train that runs on the Yeongdong line between Taebaek Station and Mungok Station in Gangwon. Both trains are operated by the Korea Railroad Corporation (Korail).

The collision killed a 77-year-old female passenger on the O-Train, identified by the surname Park. Four people maintained serious injuries, while another 87 sustained minor injuries, according to railway authorities.

The 49-year-old conductor of the O-Train, surnamed Shin, told police after the accident, “I did not check the stop signal properly.” Shin has 20 years of experience. Officials said he had not been drinking.

The O-Train had been heading from Jecheon Station in North Chungcheong toward Seoul Station and had 39 passengers, while the Mugunghwa train had 63.

Officials from the Ministry of Land, Infrastructure and Transport said that while the conductor admitted he ignored the signal, investigators will look into all factors in the crash, such as whether the automatic train stopping system (ATS) functioned properly. The investigation is expected to take about a month.

Mungok Station does not have an operator so the train signals are controlled from Taebaek Station. But conductor Park testified that the Taebaek Station’s control center did not issue any safety measures when he missed the stop signal.

Around 145 rescue workers worked overnight on recovery efforts, and the line resumed normal operation yesterday morning at around 8:50 a.m. A similar accident happened last August when a Mugunghwa train collided into a KTX train at Daegu Station when its conductor ignored a signal.