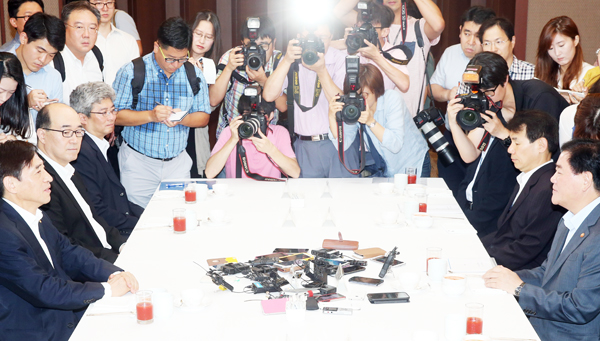 Choi Kyung-hwan, newly appointed deputy prime minister for the economy and finance minister, had a breakfast meeting with BOK Governor Lee Ju-yeol to seek help with the government’s monetary and financial policies. Provided by Kang Jung-hyun

President Park Geun-hye chaired the cabinet meeting after her first major reshuffle since she took office last year. Grand words and promises were made. Her new government took off after much delay and many controversies and failures following a three-month hiatus in reforms and policy actions due to the April 16 Sewol ferry disaster that caused over 300 deaths. She talked most eagerly and impatiently on the subject of the economy. Dramatic phrases like “last chance” and “dire resolution” were used. What caught my attention was her order to the economic team under a new head who was among her closest confidants: “Do whatever necessary - in both fiscal and monetary terms - to save the economy.” Times are urgent. But are we in such a state of emergency to demand extreme measures? According to Choi Kyung-hwan, new deputy prime minister in charge of the economy, danger looms. “We won’t constrain ourselves (in saving the economy)” with concerns about the consequences on fiscal integrity. If the government misses the opportunity to save the economy now, Korea could follow in the footsteps of Japan in its lost decades, he warned.

I remember a conversation with a ruling party bigwig 10 years ago. “I hear all the time how the economy is in danger and could be doomed,” he said. “I have never seen it go down. What exactly is a doomed economy? Why do the media and bureaucrats raise an alarming ballyhoo every time?” He then complained that the government and ruling party lose popularity because bureaucrats don’t do enough regarding concerns about damaging the national treasury. He added that economic affairs should be left up to lawmakers, not bureaucrats.

Since then, I began to suspect what politicians say. They seem to have other thoughts in mind for every cause. I worried when a veteran politician was named to head economic policy. I dreaded he would be fearless for the cause of reviving the economy, no matter what.

Then I began to wonder. What about the president? Is she the same person who strongly opposed a tax increase last year? She stood firm even as the opposition and civilian activists demanded tax hikes on the rich to help fund welfare programs. In her usual calm voice, she maintained that the government should save more to spend more on welfare. I believed she firmly wanted to defend the country’s fiscal integrity. I trusted her as a president who cares for the country’s future, not immediate results. I was relieved to know a president was at the helm who had a firm belief in fiscal balance and was concerned about the fundamentals of the economy.

Public finance should be used when it is necessary. Former President Kim Dae-jung was praised despite his administration’s generosity with public funds. Korea was able to pay off international bailout funds in just 18 months thanks to solid finances. The government spent 140 trillion won ($136 billion) to bail out financial institutions, but national debt had not exceeded 40 percent of gross domestic product. Credit should go to the stingy and discreet bureaucrats.

Presidents Roh Moo-hyun and Lee Myung-bak championed balance in public finance, but they spent extravagantly to build new economic and administrative cities and lofty infrastructure like the Four Rivers Restoration project. When attacked for excess liberty with public finances, the Lee Myung-bak government assigned the project to state-run Korea Water Resources Corp. It is a typical example of the administration “using whatever means” for its purpose. If the government wants more liberty with public finances to “save” the economy, it must do so after it gets consent from the people and legislature. The treasury does not belong to a governing power with a five-year tenure.

To get positive results for an economic cure, the diagnosis and prescription must be accurate. Treatment would be entirely different depending on whether the fever and cough are caused by a simple cold virus infection or a lung tumor.

A former minister observed that South Korea differs from Japan because its public finance is healthy.

The economy does not have to incur a major deficit in order to achieve 3 percent growth. Korea does not need to emulate the extreme and all-out fiscal and monetary steps of Japan - which has just shed its lackluster growth for the past two decades even as it maintains some the world’s largest deficits. Korea can get back on its feet through deregulation and restructuring. Recovery in the world economy also will help. It must weather the storm without risking its biggest asset - fiscal integrity. A good doctor never prescribes medicine that is too strong, because it could ruin other healthy parts of the body.