U.S. chamber president wants to even out FTA benefits

U.S. chamber president wants to even out FTA benefits 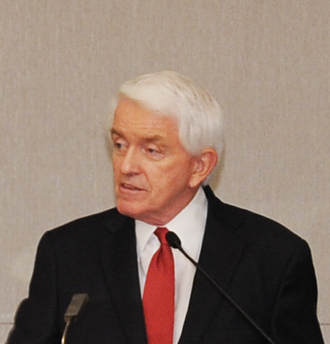 Thomas Donohue, president and CEO of the U.S. Chamber of Commerce, yesterday discussed how to better implement the Korea-U.S. Free Trade Agreement and reform American and Korean domestic policies at the Amcham (American Chamber of Commerce) Korea general membership meeting.

Donohue, president since 1997, spoke as a special guest at the annual meeting held at the Conrad Seoul hotel. Amy Jackson, president of Amcham Korea, introduced him as the “number one champion of U.S. business.”

In his speech, he repeatedly mentioned the strong partnership between the U.S. and the Asia-Pacific region.

“We keep coming back to Asia for a simple reason: It is an essential market for U.S. companies. Success here is vital to America’s prosperity,” Donohue said, putting particular emphasis on Korea’s role.

“Korea is now the world’s 14th-largest economy - and America’s sixth-largest trading partner,” he said. “Today, both Korea and America boast large and mature economies. Both are leaders on the world stage.”

As a result, Donohue said the U.S.-Korea FTA, which took effect in March 2012, should benefit both partners.

“Our job now is to ensure we fully reap its benefits. We see positive signs,” he said.

He said both countries’ increasing exports, especially of automobiles, were a good example.

However, there is work to do to make the FTA fully functional. For the more than two years since it was approved, benefits of the deal have been uneven, going only to certain industries, and its rules and guidelines are hindering growth.

“For Korus [the Korea-U.S. free trade agreement] to be a true success, we need to work hard together to get the details right,” Donohue said. “We must resolve the difficult issues and live up to…the spirit of the agreement.”

The president also pointed out shortcomings in both countries’ domestic policies. He criticized America’s lax tax system, damaged infrastructure and unsustainable social welfare programs. While applauding President Park Geun-Hye’s creative economy initiative, he said that many of Korea’s policies are inefficient and prevent the free flow of capital and innovation. “Korea has work to do - and so does the United States,” Donohue added.

“Korea is an indispensable leader in Asia, and joining the TPP would solidify that position,” he said. “The TPP will affirm and deepen America’s ties to Asia at a time when there is a perception that we are pulling back.”

Donohue said it would be simple for Korea to join the partnership because the Korus FTA is already in place.

Later yesterday, Donohue and Amcham Korea officials met with President Park and talked about Korus and the creative economy, according to the Blue House. In the meeting, Park agreed with Donohue that economists from the two countries will convene in November to discuss creative economy.