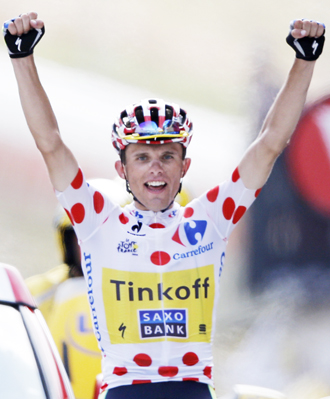 On the last of four Pyrenees ascents, Rafal Majka winked at a French TV camera and tugged playfully at a motorcycle’s antenna.

Even this late in the Tour de France, the Polish rider made winning look easy as he took Stage 17 on Wednesday.

For Vincenzo Nibali, the second ride in the mountains on France’s border with Spain was more serious. “The Shark’’ nibbled yet more seconds away from several of his closest challengers, and the yellow jersey that he has worn for all but two days of the race seemed to fit just a little more tightly ahead of the finish Sunday in Paris.

Nibali was even businesslike with his own prime minister, imploring him not to get too ahead of himself in celebration.

“It’s true that I received a text message from Matteo Renzi, who invited me to Chigi Palace to celebrate my victory,’’ the cautious Sicilian said. “I replied that only after winning - if I do so - will I be able to say I’ll be present.’’

The 124.5-kilometer (77-mile) trek Wednesday was the shortest stage in this year’s Tour. It covered three hard Category 1 ascents from Saint-Gaudens and a final push up to Pla d’Adet ski station above the town of Saint-Lary-Soulan.

Majka, who also won Stage 14 in the Alps, again showed he’s the best climber in this Tour and tightened his grip on the polka dot jersey awarded to the race’s King of the Mountains.

Giovanni Visconti got the action going on the last climb with a solo breakaway with about nine kilometers left, but could not hold off Majka. Visconti, who also is Sicilian, was second, 29 seconds back, and Nibali was third, 46 seconds behind.

With a final Pyrenean day ahead, Majka could ensure that he takes home the red-dot jersey. His closest rival for it when the stage started was Spain’s Joaquim Rodriguez, who swatted the air in frustration at Majka when the Pole broke away on the last climb.

By Wednesday, “I felt really, really good in the last climb,’’ Majka said, after tapping his chest, thrusting his arms skyward and shouting in joy at the victory. “For me, when there are a lot of climbs, it’s the best.’’

There was a time when seemingly effortless victories smacked of something more sinister at the Tour: the use of performance-enhancers.

Few know the scars of cycling’s doping past more than Majka’s own manager at the Tinkoff-Saxo Bank team, Bjarne Riis. Once a national hero in Denmark after winning the 1996 Tour, he admitted to using blood-booster EPO more than a decade later and was vilified for it. He laid low for a while, but then returned to the pro cycling world. “I promised Bjarne today that I would win the stage,” said Majka.