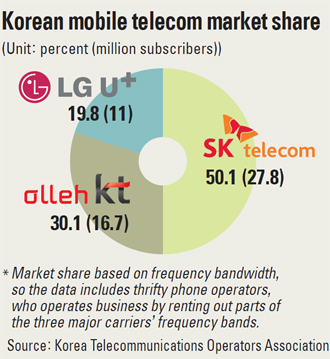 The government once again sent out a rejection letter to a local consortium of small businesses hoping to break into the market by providing mobile phone customers more choices. The move put an end to the possibility that a fourth mobile phone operator could find its way into Korea’s already-saturated telecom market.

The Ministry of Science, ICT and Future Planning yesterday announced that it had decided to reject a bid by Korea Mobile Internet (KMI), a local consortium of small businesses that was eager to receive the government’s approval to purchase an idle frequency bandwidth of 2.5 gigahertz.

Because of financial difficulties, the company received a total of 62 points this time, a lower mark compared to past application sessions. A minimum of 70 points is required to pass the assessment.

This was KMI’s sixth attempt participating in the bid, but it ended up receiving a rejection letter largely due to its financial status, the ministry said. Ever since the consortium entered the bid in 2011, an unstable financial status plagued the group’s goals. The ministry said the consortium’s two largest shareholders are foreign investors who provided unrealistic investment plans, pledging a bigger investment than their equity capital.

“Financial status is extremely significant, because when investment doesn’t come in as planned, the operation may be hindered, resulting in significant damages to subscribers,” said Kim Joo-han, the director general of telecommunications policy at the ministry. “The ministry doesn’t have any plan to ease the assessment standard when it comes to financial stability.”

The consortium received 74 points for technological capability and its willingness to offer more diverse kinds of mobile services, such as long-term evolution time-division (LTE-TDD) and Internet of Things (IoT) technology.

The KMI consortium, led by a former high-level civil servant at the Science Ministry, Gong Jong-ryeol, wanted to start offering LTE-TDD, an unprecedented method of mobile communication in Korea, to introduce a new data network and expand the range of the nation’s mobile network and device technologies.

The government originally hoped to obtain experience with the data network to help develop new smartphones, customized in countries using the LTE-TDD network, as part of efforts to explore a new export market. The LTE-TDD method receives and transmits data in a single frequency band, unlike Korea’s LTE-FDD, which uses two separate bands. The LTE-TDD technology is primarily used in China, India and Australia.

If the Science Ministry had approved the consortium this time, KMI could have become the smallest emerging competitor to Korea’s three existing carriers. The mobile market is already experiencing a reduction in the number of customers willing to switch carriers, which is largely due to government policies to have companies introduce cheaper monthly plans.

The move prevents the three carriers from providing illegal subsidies to steal one another’s customers.