IT has good Q2, industrial suffers

IT has good Q2, industrial suffers 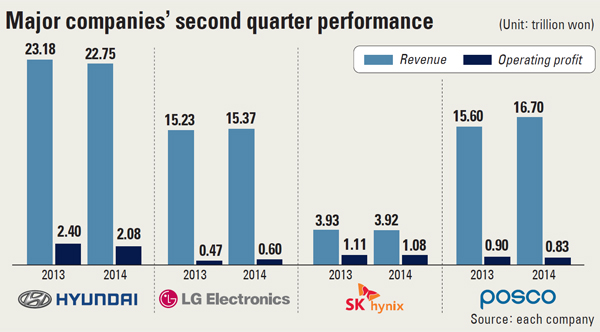 LG Electronics said its operating profit for the second quarter increased 26.5 percent year-on-year to 606 billion won ($589 million), thanks to strong earnings from its mobile operations and the displays.

Its net profit also soared 165 percent year-on-year to 412 billion won on a consolidated basis, while its second-quarter revenues were 15.37 trillion won, a 1 percent increase from the previous year.

All of the figures were LG Electronics’ largest since it adopted consolidated financial statements in a 2012 International Financial Reporting Standard (IFRS) change, according to the LG Group affiliate.

The earnings improvement in the second quarter came after the company shipped 19 million mobile phones in the three-month period, the most since the third quarter of 2011.

“Despite increased marketing costs in the second quarter compared to the first, the successful launch of the G3 and bullish sales of G series and L series phones contributed to our sales growth and increase in profitability,” said a spokesman for LG Electronics.

In the first six months, Korea’s No. 2 electronics company saw its operating profit shoot up 34 percent year-on-year to 1.11 trillion won. First-half revenue reached 29.64 trillion won, and gained 1 percent over a year ago.

The chipmaker’s second-quarter figures are all down from a year ago because of the currency situation, but SK Hynix said that its business has improved compared to the first quarter.

“We posted positive earnings thanks to the smooth technology migration of DRAM and NAND flash, as well as revived demand for the mobile products,” said a spokesman for SK Hynix.

According to the company, its shipments of DRAM increased 13 percent over last quarter, more than the company originally expected, due to an increase in the use of 20nm-class process technology.

Its NAND flash shipments rose 54 percent quarter-on-quarter, thanks to 1Xnm and restored demand for mobile products abroad, the company explained.

“In the latter half, SK Hynix will constantly increase the proportion of 2Ynm DRAM to improve its cost competitiveness and organize flexible product portfolio according to the market situation to maximize the profitability,” said a spokesman for SK Hynix. “For NAND flash, the company is to expand the portion of 1Xnm in applications such as mobile and SSD.”

“Despite a sales increase with the release of new models and our continuous effort to reduce costs, our revenue and operating profit dropped because the Korean won to U.S. dollar currency rate fell about 5.1 percent in the first half compared to a year ago,” the automaker said in a release.

The strong Korean won has haunted Hyundai, which relies on overseas sales, throughout the year.

The automaker sold 2.49 million vehicles worldwide in the first six months of 2014, up 4.4 percent from year ago, but due to the currency situation, its operating profit in the first half was 4.02 trillion won, down 5.8 percent from a year ago.

Its operating profit ratio is now 9.1 percent, down 0.5 percentage point year-on-year. The company was worried that its profitability could worsen.

“We originally set a won-dollar currency rate at 1,050 won, but in the second quarter it plunged to 1,030 won and ended up 1,048 won on average in the first half,” said Hyundai Motor Chief Financial Officer Lee Won-hee. “For the second half, the currency rate is expected be around 1,020 won.”

Posco had revenue of 16.7 trillion won and operating profit of 839.1 billion won in the second quarter on a consolidated basis. This is an 8.2 percent and 14.7 percent increase from the first quarter, respectively.

“Despite a strong won that caused unprofitable export prices for our products, our operating profit ratio posted 5 percent on a consolidated basis due to profitability improvement in our steel manufacturing affiliates,” Posco said.

The steelmaker expects to have a better third quarter as demand for steel products picks up along with the economic recovery in the United States and elsewhere.

Posco, as a group, aims to collect revenue of 64.5 trillion won for this year.