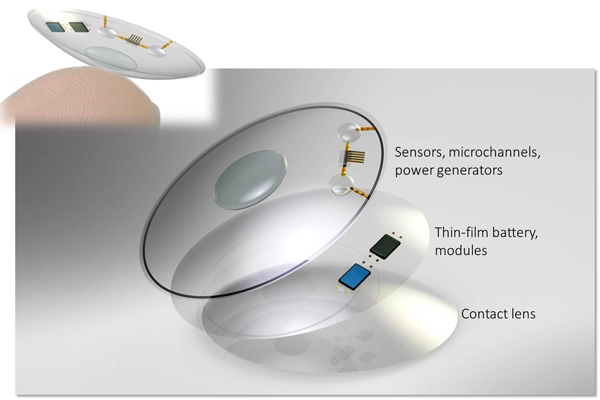 A local research team said yesterday it is developing a smart contact lens for diabetes patients that monitors glucose levels, making it a rival of Google’s lens project introduced in January.

The state-run Korea Institute of Science and Technology (KIST), the developer, said the two lenses are expected to have similar functions, including tracking sugar levels and transmitting information by using Internet of Things (IoT) technology.

Song Yong-won, the team’s leader and the lead researcher at KIST, said in an interview yesterday that the two projects began at around the same time in 2011, when Google started studying with the University of Washington and KIST began its project independently.

Song said the KIST lens can’t transmit data yet, but he hopes to cooperate with other institutes that specialize in wireless telecommunications such as the Electronics and Telecommunications Research Institute (ETRI).

“Despite lacking a data transmission function, I would say that the KIST lens has its own strengths different from Google’s project,” Song said. “Our lens is equipped with a power supply function and more sophisticated body sugar measuring technology.”

Google’s lens research is more focused on enabling live data transfers, which led to its partnership with Novartis, the mother company of one of the world’s largest eye-care product makers, Alcon. KIST’s main focus was on maximizing the accuracy of the estimated glucose content to help diabetics.

The institute hopes to develop a final lens that can contain and analyze the level of the glucose level secreted for three days, which Song said is enough time to read the body’s diabetic trend.

The goal of the lens is to make patients’ lives easier by removing the task of pricking fingertips, which diabetics must do about 10 times a day to get an accurate glucose level reading.

Song said that liquid in the eye contains many other substances besides glucose, including potassium, sodium and lipocalin, which is why the lens must have highly accurate technology. Glucose content also fluctuates when a user cries, which secretes a different fluid than is normally found in an eye.

“That is why we used real human tears throughout our experiments, instead of a glucose solution. Our goal is to boost the accuracy of measuring the sugar level,” he said.