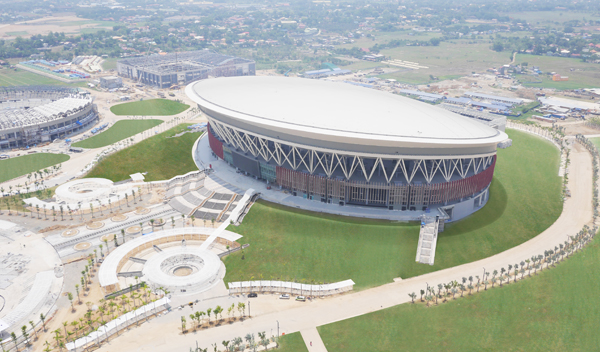 A bird’s eye view of the world’s largest indoor arena built by Hanwha Engineering and Construction, which opened Monday in the Philippines. The arena has more than 50,000 seats and will be used as a multi-purpose performance hall for rock concerts and musicals. Provided by the company

The world’s largest indoor arena with a seating capacity of more than 50,000 opened Monday in the Philippines after a leading Korean construction company completed construction.

Hanwha Engineering and Construction said yesterday the Philippine Arena in Bulacan, on the island of Luzon, has 51,000 seats and can hold up to 55,000 visitors at once.

"By completing the construction of the world’s largest dome arena, Hanwha E&C has been acknowledged both at home and abroad for its technical skills and ability to carry out an overseas order,” Lee Keun-po, the company’s president, told employees after the opening ceremony.

The opening was attended by high-level officials from both countries including Philippines President Benigno Aquino III, former Philippines President Joseph Estrada, Iglesia Ni Cristo (INC) Executive Minister Eduardo Manalo and Lee. More than 60,000 people were invited to the event, which included a tape-cutting ceremony, a musical performance and a speech by Aquino. 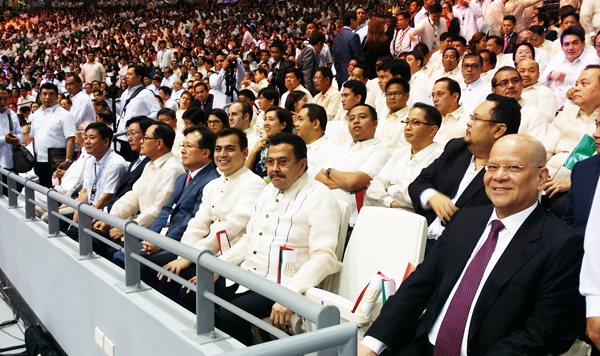 Hanwha E&C President and CEO Lee Keun-po, fourth from right, attends the opening ceremony Monday of the indoor arena in the Philippines. Provided by the company

Philippine Arena has 74,000 square meters of floor space and its roof is 35,948 square meters. It is three times larger than the Olympic Gymnastics Arena in Jamsil, southern Seoul.

According to the company, Hanwha won the order from INC, a Philippine Christian foundation, to build the dome in 2011, beating bidders including China’s Giangsu International and the Philippine’s EEI. At first, INC planned to use the arena to hold religious events but later it changed its plans to make it a multi-purpose facility for performances and events including classical music performances, rock concerts and musicals.

The Korean builder is known to have earned higher points than the other bidders for its technical skills. Hanwha E&C was responsible for the entire design and construction process of the dome, which took 30 months from August 2011 to May 2014. About 20 executives and employees from Hanwha E&C headquarters were dispatched to the site and an average of 2,000 people worked at the site each day.

“The key to the world’s largest dome was the structural design and the construction capacity of the arena’s roof,” the company said in a statement yesterday.