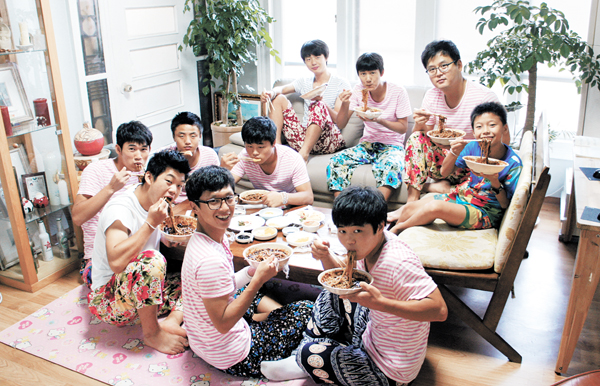 Ten North Korean children and their uncle, Kim Tae-hoon, (third from left, back row) redefine the notion of family in the documentary “Our Family.” Provided by Mountain Pictures

Despite an increase in the number of North Korean defectors in recent years, South Koreans, for the most part, remain uninterested, even indifferent, to their plight.

For many who have fled to the South from Pyongyang in search of safety and security, life is not easy. Instead of a warm reception and a life of abundance as promised, it is cold stares and indifferent attitudes that mostly greet new arrivals. Compounding the problem is that the media is rife with depictions of North Koreans as petty thieves or ne’er-do-wells.

Films don’t do a particularly better job, either: North Koreans are often depicted as Communist spies who choose allegiance to the North over their southern friends.

However, the first thing Kim Do-hyun, the director of “Our Family” noticed about Kim Tae-hoon, a bachelor in his late 30s, and 10 North Korean boys, was “how ordinary” they were. So he decided he wanted to document their lives on film to “do away with all the false representations surrounding North Koreans.”

“The problem is that there is no climax or drama,” Kim said. Instead, the film tells the extraordinary tale of a man who gave up his life to become a full-time parent to children who were just starting new lives in the South. With only three of his kids having any relatives in the South, Kim Tae-hoon has become both a mother and father figure to the boys, who call him uncle - “some of the kids are pretty old, so I can’t be their father.”

His journey started about 10 years ago when Kim Tae-hoon was volunteering at a facility that cares for young defectors. There he met Ha-ryong, who asked him if he was going home. “I said to him, ‘No, I’m just going home to get some clothes, I’ll be back.’”

And so began his new life.

“Honestly, I didn’t set out to be a do-gooder, I just had fun with the kids,” he said, on what it was that made him trade his steady job at a publishing company for a house full of rowdy children and dirty laundry.

The movie follows the family throughout their daily lives, as well as their trip to Thailand, where the children learn what it’s like to be on the giving end of charity. The bond between the boys is also heartwarming and the question of what constitutes a family is examined indirectly.

The best part of the film is that there is no overt message, no agenda, just a simple telling of events of some fascinating characters and the way in which kindness triumphs.

The documentary plays with English subtitles.