Liberals get acts together

Liberals get acts together 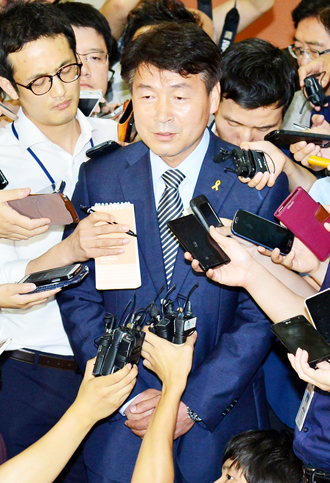 Ki Dong-min, opposition candidate in Seoul’s Dongjak B parliamentary district, talks to the press after relinquishing his candidacy. [NEWSIS]

Competing opposition parties were able to get behind single candidates in two major constituencies, Seoul’s Dongjak B District and Gyeonggi’s Suwon D District, ahead of by-elections next week.

Ki Dong-min, the candidate vying for Seoul’s Dongjak B District parliamentary seat for the New Politics Alliance for Democracy, announced yesterday that he will relinquish his bid to back the Justice Party’s Roh Hoe-chan.

The opposition candidates for Dongjak struggled in a meeting Wednesday to come together to compete against the ruling Saenuri Party candidate, Na Kyung-won, who is ahead in the polls.

“I resign my candidacy. I will give up everything,” said the NPAD’s Ki at a press conference yesterday afternoon. “I wanted to spread the change that began with [Seoul] Mayor Park Won-woon’s election to the entire nation, but that was my greed and arrogance.”

Ki, a former deputy Seoul mayor and a close aide to Mayor Park, added, “I would like my decision to be of some help to sway the hearts of the people who have been disappointed in the opposition.”

He added that he made the decision on his own without confiding in his party.

“I am with all those who wish to send a stern warning to the Park Geun-hye government,” he said. “I hope in Dongjak, Candidate Roh Hoe-chan will fulfill my desire to deliver a verdict to the Saenuri Party and be victorious, and I will be actively supporting him.”

Roh will face off against Na, the Saenuri Party politician who lost the 2011 Seoul mayoral race to Park.

The agreement came in time for the two-day early voting period for the July 30 by-elections that kicks off today at 6 a.m.

Because Dongjak B District in southwestern Seoul is the only seat being contested in the capital in the by-elections, the race is being observed closely.

Roh, who had pledged to give up his own candidacy if the opposition parties failed to agree on a single candidate, held a press conference yesterday after Ki’s resignation.

Holding his own resignation letter, Roh told reporters he had been planning on submitting it to the National Election Commission but that Ki, his senior, had beat him to the punch.

Roh, a high-profile liberal activist and a former lawmaker, had been leading in recent opinion polls compared to Ki, who had earlier been reluctant to cede the race.

The minor opposition candidate said that Ki “is qualified like no other as a National Assembly representative, so I never wanted a unilateral concession. When we met yesterday, I said, ‘Let’s try another kind of politics.’ He said, ‘Today is a day my younger brother wins.’”

Roh continued, “I will fulfill Ki Dong-min’s vow to deliver a verdict on the Saenuri Party. I will actively meet with other opposition candidates and find a way to combine their strengths into one.”

“With the disaster experienced by the people in Dongjak and Suwon due to the two governments of Lee Myung-bak and Park Geun-hye,” said Chun as he announced he was stepping down to support the NPAD’s Park Kwang-on, “we had to come to a decision to block the election of two key figures of the Park administration.”

NPAD’s Park is set to compete against Saenuri Party’s Yim Tae-hee, a former chief of staff to President Lee Myung-bak for the Suwon D District seat.

Starting from yesterday, opinion polls have been prohibited ahead of the by-elections next Wednesday, and the last opinion poll indicated that the ruling party is leading in major constituencies.

In a KBS poll, the Saenuri Party was leading in five out of six metropolitan seats, and a JoongAng Ilbo poll showed four out of five.

In the past, similar mergers had been successful in revitalizing the opposition candidates’ electoral campaigns, such as in the 2011 Seoul mayoral race in which Ahn Cheol-soo, co-chairman of the NPAD, stepped down to back Park Won-soon. Through the electoral alliance, Park’s support rate increased drastically.

According to the JoongAng Ilbo poll conducted on Wednesday, Na was in the lead at 44.5 percent, followed by Roh at 34.4 percent.