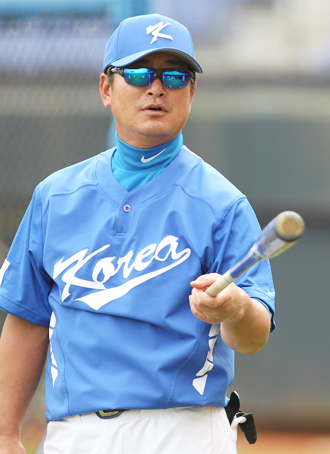 This weekend will be a tough one for Samsung Lions manager Ryu Joong-il, and not because he’s having problems running his team. It is time to decide on the final roster for the 2014 Asian Games. Ryu will be the manager of the national baseball team in the September event, and he will announce his 24-man roster on Monday.

“Well, I have one rule as I have consistently said. I will bring players who have been playing well this season,” said Ryu. “Some people say I should give the league’s best prospects a chance so they can earn a military exemption, but that is nonsense. I care only about winning.”

By law, players who win a gold medal in the Asian Games receive an exemption from two-year military duty. Many Koreans joke about the benefit as a “military-roid” that makes athletes play harder.

Ryu said he has been in contact with the Korea Baseball Organization technical committee chief Kim In-sik for input on the roster and is in the final stage of the selection process. “Out of 24 players, there was pretty much a consensus about 18 or 19 players,” said Ryu. “However, there were different views on the last five or six players.”

Ryu said there are no problems selecting the starting pitchers, but relievers and a closer are a different matter. “Since it is a tournament, I think three or four starting pitchers will be enough,” he said. “But I don’t see many good relievers who can dominate hitters in an international event.”

Judging by his previous interviews with media outlets throughout the season, two spots in the starting rotation will likely be taken by Kim Kwang-hyun (SK Wyverns) and Yang Hyun-jong (Kia Tigers), with Song Seung-joon (Lotte Giants), Noh Kyung-eun (Doosan Bears), Yoon Sung-hwan (Lions), Jang Won-joon (Giants) and Lee Tae-yang (Hanwha Eagles) contending for a spot. Song and Noh have experience in international competitions such as the World Baseball Classic, but they have struggled in the league this season. Right-hander Lee, the Eagles’ rising star, also is considered as a possible reliever.

The closer role could be a serious problem, with the KBO’s all-time best Oh Seung-hwan playing in Japan this season. Ryu considered the Lions’ new closer, Lim Chang-yong, but he has been unreliable of late. Last season’s save leader, Sohn Seung-rak of the Nexen Heroes, also is having an off year (22 saves/5.08 ERA).

For relievers, baseball analysts predict Ryu will select the Lions’ Cha Woo-chan to be a swing man and Ahn Ji-man for the eighth-inning setup role. “It really is hard to predict whom Ryu will choose for relievers,” said analyst Lee Yong-chul. “If he thinks the team’s pitching won’t be as strong as he expected, he might want to select more outfielders to beef up the offense, which would reduce the number of infielders.”

“Catcher also is a difficult position,” said Ryu. “Yang Eui-ji [Bears] is the one of the best catchers in the league, but Kang Min-ho [Giants] has substantial big-game experience. I also can’t ignore Lee Jae-won [Wyverns], who is batting .393 this season.”

Ryu and the technical committee will have a final meeting at 2 p.m. Monday and announce the roster afterward. But if a Lions game is rained out over the weekend, the announcement would be delayed until Tuesday.

“Since everyone looks at players in different ways, there will be arguments no matter what I decide,” said Ryu. “But again, my only focus is winning a gold medal in the Asian Games.”