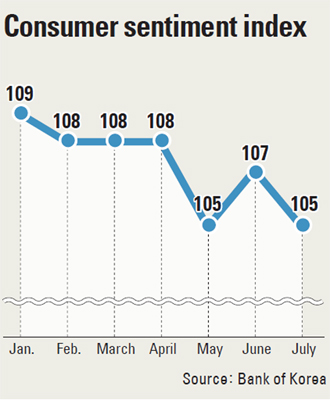 The sag in consumer sentiment is largely believed to have been caused by disappointing economic growth in the second quarter that was announced on Thursday.

According to the Bank of Korea yesterday, the consumer sentiment index for July was 105. This was down from 107 posted last month.

Even though optimism over the economy remains, the slight drop could signify that consumer spending might not improve in the immediate future.

“As economic indices reflecting the impact of the Sewol tragedy are released and economic institutions including the central bank are lowering the outlook for the year, it seems there are more consumers who feels as though the economy is getting worse,” said a BOK official.

The central bank on Thursday released the figure for second quarter economic growth, which was 0.1 percentage point lower than its earlier projection of 0.7 percent. It said that the affect of the sinking of the Sewol ferry in April on consumer spending was more severe than it had anticipated.

An index comparing current economic sentiment with that of six months earlier came up at 75. That’s the lowest since April 2013, when the index hit 74.

The outlook for six months later showed a reading of 92, the lowest since April 2013’s 88.

As consumer sentiment continues to be weak, the question once again is whether the central bank will try to turn the tide by lowering interest rates. There has been growing pressure on central bank governor Lee Ju-yeol to complement the Finance Minister’s stimulus program, which focuses on encouraging households to spend.

There is an ongoing debate on whether the lowering of interest rates would help households spend more. Central bank governor Lee earlier this month said that while lowered rates might have a limited contribution to increased spending, a bigger problem may arise from growing household debt.