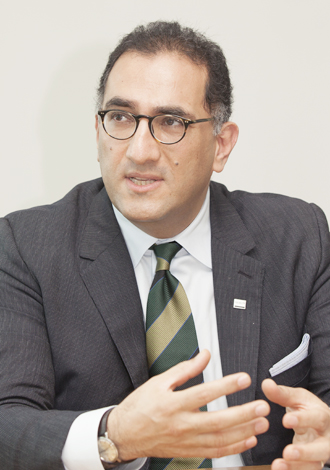 Bonian Golmohammadi, secretary general for the World Federation of United Nations Associations, talks in an interview in Seoul. By Park Sang-moon

On his 10-day trip to Korea last week, women’s rights advocate Bonian Golmohammadi congratulated the Korean government on its foresight in understanding the need to establish the Ministry of Gender Equality and Family.

In an interview with the Korea JoongAng Daily on Wednesday, the secretary general for the World Federation of United Nations Associations (Wfuna), called its establishment “an excellent idea.”

The non-profit organization was founded in 1946 with the mission to support the humanitarian activities of the United Nations.

Golmohammadi, who previously headed the United Nations Associations in Sweden for eight years, praised the efforts taken by the Korean government during his trip to the Korean Institute for Gender Equality Promotion and Education (Kigepe).

The state-run institution promotes gender equality. It also works to strengthen the role of women in a society that is still largely dominated by men, in which many are still held back by discrimination in the workplace.

The sense of imbalance felt by Korean women is well illustrated by the country’s average birth rate. According to the Ministry of Health and Welfare, the nation’s average birth rate stood at 1.18 last year, the lowest among members of Organization for Economic Cooperation and Development (OECD). Over the last seven years, the government has poured 53 trillion won (51.7 billion) into efforts to spur sagging birth rates, though to no avail.

“You can see the world as a bird with two wings: men and women,” Golmohammadi said.

“If one wing is much stronger than the other one, you will not have proper flight.”

Many male critics argue that it was unfair for the government to establish the Ministry of Gender Equality and Family, which focuses on advancing the rights of women, while the nation’s able-bodied men are required to complete two years of military service.

“Men are the ones who are causing war,” the Wfuna secretary general said in response to those laments. “In conflict situations, the UN Security Council has recognized that women, who are less involved in fighting, are impacted much more negatively than men, who are primarily the cause of the problem, not the ones seeking the resolution.”

KIGEPE, which invited Golmohammadi for a talk last week on upgrading the level of cooperation between his organization and Korea, runs under the auspices of the Ministry of Gender Equality Promotion and Education. It is currently led by Kim Haing, a former Blue House spokeswoman.

“We are now seeking to promote the lessons we have learned over the past few decades on female empowerment to other countries in Africa, the Middle East and other regions [where activists] are endeavoring to raise women’s rights,” Kim said.

Golmohammadi visited the non-profit institution in Eunpyeong District, northern Seoul, during his 10-day visit to Korea to promote public awareness for the New York-based Wfuna. He also sought cooperation with Kigepe in discarding gender discrimination, an issue the 51-year-old called “a global challenge.”

To overcome the challenge, he emphasized that adequately educating children about gender discrimination was crucial.

“I grew up in Sweden and it has seen a big transformation in gender equality. Over about two generations, women in parliament and those in the business circle have increased a lot. Part of that has to do with education,” he said.

“What you see as a child, not only within your family, but in your school, on television and in movies has a tremendous impact. I am glad to see that gender equality programs [produced by Kigepe] cover related [educational programs].”

Golmohammadi also noted that the government should take a more active role in ensuring fair practices are taking place in the private sector and dole out strong punishments to companies that discriminate against women.