In Dongdaemun, the past and present collide

In Dongdaemun, the past and present collide 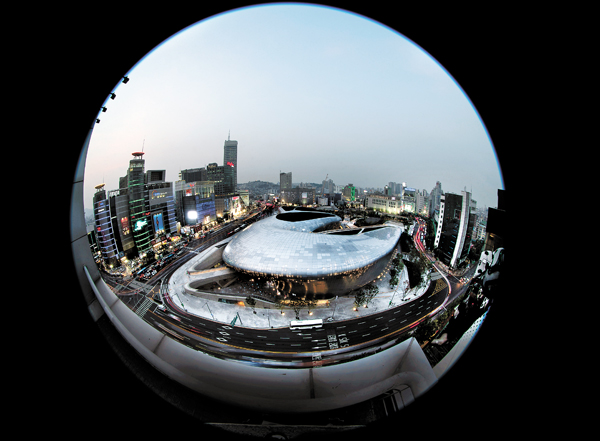 When the public refers to Dongdaemun in central Seoul, it generally goes beyond Dongdaemun District. Although located just across the street, the actual Dongdaemun [Gate] belongs to Jongno District, while the shopping center, including Migliore and the Pyeonghwa Market, is located within Jung District. But for most, Dongdaemun is all of that and more, with years of history behind it.

In 1905, Dongdaemun Market - formerly Gwangjang Market - was established, and 20 years later, the Dongdaemun Stadium first opened its doors. The Pyeonghwa Market was set up in 1962 by refugees from the 1950-53 Korean War, and soon hundreds of small sewing factories started to pop up. Poor working conditions in those shops was what led tailor Jeon Tae-il to commit suicide in 1970 by self-immolation. The young rights activist was just 22 years old at the time of his fatal protest.

In the mid- to late-1990s, high-rise shopping centers, such as Migliore, began to pierce the skies. Demolition of the defunct Dongdaemun Stadium began in 2007, and on that site, the Dongdaemun Design Plaza was officially established this year after much controversy. The area has played a dramatic role in modern Korean history.

“In the 1970s and ’80s, there were lines of old bookstores near the Cheonggye Stream, but people today don’t even know we had book thieves [at the time],” said Kim Jong-guk, the 69-year-old owner of Kukdo Bookstore, which has remained in business there. Although the area has now transformed into what looks like a futuristic town, Kim says long-time Dongdaemun merchants like himself have one or two treasured memories from the past.

The division of night and day is also meaningless in Dongdaemun. Rather, it’s at night when Dongdaemun comes alive. Wholesale and retail store clerks turn on their lights at dusk as night shoppers crowd in. Street stall vendors are quick to cater to shoppers’ empty stomachs, having made a permanent niche for themselves as integral players in Dongdaemun’s bustling nightlife.

Late-night movie screenings also attract lovebirds, with many merchants complaining that “it’s not like the old days anymore.” As fast fashion brands and online shopping malls have become rapidly more popular, the area teems not only with local evening customers, but also tourists, especially those from China. When China’s first lady Peng Liyuan accompanied her husband, President Xi Jinping, to Korea early this month, she was reported to have enjoyed her own round of night shopping in Dongdaemun.

The JoongAng Ilbo picked out some of the must-visit shops among the approximately 35,000 shops in the area. To get the full Dongdaemun experience, visit by night, strike up a deal with the merchants and tail the tourists. The following is a quintessential guide for a lovely night out. 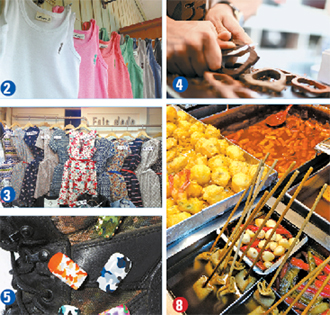 It’s the oldest store in Kwanghee Fashion Mall and has kept its space for more than 20 years. Daejinsa specializes in leather rider jackets that the owner personally designs. Made in his own factory, the products boast cheaper price tags than other stores. A sheepskin rider jacket is priced between 270,000 won ($262) to 280,000 won. Prices of leather items don’t fluctuate too much, but summer has slightly better deals.

In Jeil Pyeonghwa Market, visitors can buy quality children’s wear at a bargain. At Mari, find matching clothes for mom, dad and baby. Clothing for kids includes leggings, swimwear, cardigans and much more. The store frequently has sales, and a pure cotton T-shirt for infants to 3-year-olds costs 5,000 won.

This so-called copycat store sells imitations of designer brands. The special “Dongdaemun system” allows design, order, manufacturing and delivery all in one stop. Fais Dodo specializes in copying one-piece dresses, and although the shop is small, it has many regulars.

Here, visitors can purchase handmade eyeglasses frames. The store’s owner, Jo Im-su, 39, designs and manufactures the frames. And except for the time when he cuts out the grooves needed for screws, Jo says he never uses a machine. Rosewood, ebony and walnut tree bark are the most common frame types, though visitors can custom-make their own. The production period is about a week. All frames cost 380,000 won each.

Nail artist Park Eun-kyung, 32, is a regular here, and known as the exclusive manicurist for celebrities like Lee Hyo-ri and members of the girl group 2NE1. The shop not only provides manicures as well as nail care products and ornaments. Small applique bags are also for purchase.

Stylist Park Seon-young, 40, a known stylist for model Miranda Kerr, is a regular at this store. Unique clothing is produced using the trendiest fabrics. One-of-a-kind accessories also sell out very quickly. Summer dresses are priced between 80,000 won and 150,000 won, while accessories cost 30,000 won.

This store is said to have the highest sales among shops in Lotte Fitin. It specializes in women’s apparel and boasts annual sales of 1.4 billion won. Its design concept is romantic, contemporary and semi-casual and offers matching shoes, bags and accessories. The shop’s most popular items are its floral blouses and skirts, which cost around 50,000 won to 60,000 won. 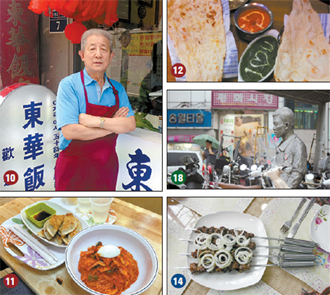 This tteokbokki (rice cake in a red pepper sauce) shop has been in Dongdaemun for 29 years. A first-generation Dongdaemun store, Seoul Tteokbokki offers ban-ban on its menu. “Ban-ban,” which means “half-half” in Korean, is a plate of tteokbokki mixed with fries for customers who come alone. The owner is also known to be generous, with patrons who have frequented the eatery for more than 20 years.

This snack bar selling steamed buns has been in business in the same spot since 1989 and is surrounded by clothing wholesalers. Kukil Bunsik is named after the owner’s son and customers can order on the first floor of the shop and eat on the second floor. Two buns cost 2,000 won, while eight dumplings cost 3,000 won. The shop offers breakfast for the wholesalers and opens early.

This high-quality Chinese restaurant is open late. Jin Jang-won, 71, a first-generation Chinese chef, has been running this restaurant since 1976, and eatery was previously visited by former Presidents Kim Dae-jung and Kim Young-sam. Although it’s not on the menu, most tables order palbo wanja, or seafood meatballs. A meatball made with pork and seafood goes for 60,000 won.

This snack bar located on the first basement floor of Jeil Pyeonghwa Market has no signboard, so go down gate No. 4 and you’ll see it. Among Dongdaemun shoppers, this shop is famous for its bibim guksu, or spicy noodles. With only three tables, the snack bar operates on a reservation system, and customers must eat and leave within 20 minutes. Noodles are 6,000 won. Open from 8 p.m. to 5 a.m.

It’s Korea’s foremost Nepalese restaurant. Opened in 2003, it sells more than 300 curries per day. Everest ships in its own spices and sauces from Nepal, giving it an authentic taste and feel. Among Koreans, the most popular dish is the creamy Chicken Makhani or the Aloo Palak, a spinach curry with potato. Each costs 8,000 won.

Located on the third floor of the Good Morning City building.

This food court in Lotte Fitin is designed by world-renowned Egyptian industrial designer Karim Rashid. The curvy interior and thoughtful lighting makes the atmosphere feel luxurious. But despite its fanciful look, prices are similar to those of other food courts. Bibimbap (rice mixed with vegetables) is priced at 6,500 won and a pork cutlet is 7,000 won.

On the same floor, there’s a pub restaurant, 8 Miles, where visitors can look down on the futuristic Dongdaemun Design Plaza.

It’s a laid back, cozy Uzbekistani restaurant that’s known for its shashlik, large chunks of lamb served on a skewer. Many curious Korean customers who came to enjoy Uzbek food have become devoted regulars, due in large part to the restaurant’s generous servings. The eatery is located in Central Asian Town in Dongdaemun, where peddlers from Russia and Central Asia flock. The owner also runs two other restaurants in the area. One shashlik costs 5,000 won. 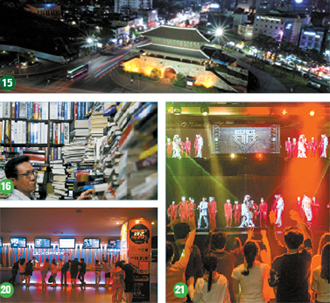 Dongdaemun, completed in 1398, was originally called Heunginjimun, but during Japanese colonial rule, the gate was registered as cultural property and renamed. Later, in 1996, when the country was making efforts to verify its wartime history, the gate regained its original moniker, though the neighborhood is still called Dongdaemun. After sunset, lights come on automatically. In the summer, it’s usually by 8 p.m.

Around Pyeonghwa Market, there are about 30 bookstores selling old and used titles. These shops are mostly 30 to 50 years old and sell about 10,000 titles in tiny outlets. Each bookstore carries a different genre. Kukdo Bookstore, in business for 52 years now, carries liberal arts books, while Changmunsa carries foreign titles.

In front of the tall shopping malls in Dongdaemun, there is an outdoor stage where many popular singers have passed through. The informally named Dongdaemun stage holds outdoor concerts for up-and-coming artists and has served as a platform for emerging K-pop groups to host showcases. Girl group Crayon Pop held a concert on one of these stages, for example, to showcase their song “Bar bar bar.”

Hello apM’s outdoor stage is also the site of a daily singing contest. Participants can take the mic from 6:30 p.m. every day except Tuesdays.

On Nov.13, 1970, factory worker Jeon Tae-il burned himself to death in front of the Pyeonghwa Market, where he infamously shouted, “Comply with the Labor Standard Act!” His sacrifice was the beginning of contemporary Korean history.

To memorialize the labor rights activist, a statue was erected on a bridge over Cheonggye Stream in front of the Pyeonghwa Market. The crosswalk was aptly named the Jeon Tae-il Bridge. On the ground, thousands of messages have been engraved on brass sheets left by the public. 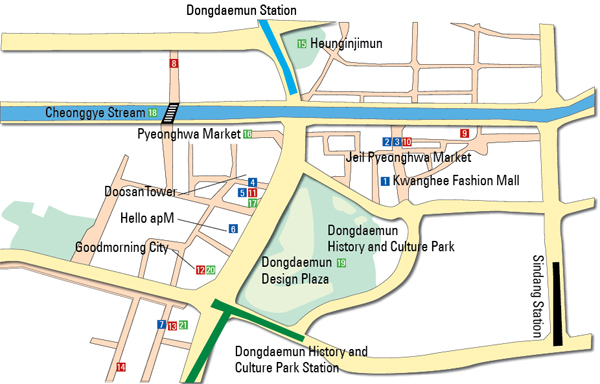 Now commonly acknowledged as Dongdaemun’s newest tourist attraction, this large futuristic building has three underground floors and four above, housing 15 spaces for design exhibitions and much more. It’s also a good place to take a stroll during summer nights. Lighting on the building’s outer walls come on at sunset and stay on until 10 p.m.

Megabox is the only multiplex in the neighborhood that opens for late-night movies. A package program, Movie All-night, allows customers to watch three movies back-to-back from midnight to dawn. The package program is offered every Friday and Saturday. The theater also provides blankets and feet covers. A package for three movies, which includes a drink and popcorn, costs 18,000 won.

Located on the ninth floor of Good Morning City.

Clive, a new K-pop concert hall, opened its doors earlier this year. Using hologram imagery, it revives live performances by K-pop stars like Psy, Big Bang and 2NE1. The concert hall is equipped with a high-tech sound system, offering shows that are as good as the real deal. Visitors can also purchase K-pop albums and accessories.