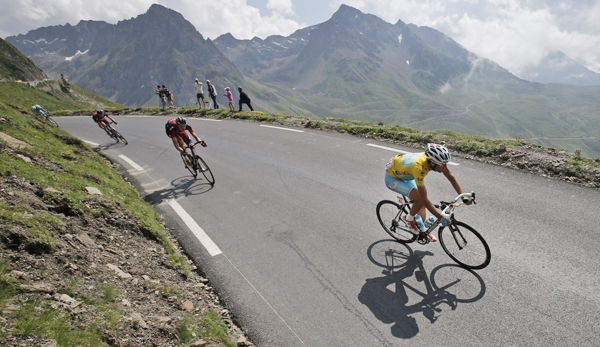 Stage winner Vincenzo Nibali of Italy, wearing the overall leader’s yellow jersey, speeds down Tourmalet Pass during Stage 18 of the Tour de France cycling race over 145.5 kilometers (90.4 miles) on Thursday. The stage started in Pau and finished in Hautacam in the Pyrenees region of France. [AP/NEWSIS]

Vincenzo Nibali crushed everyone on the last mountain leg of the Tour de France on Thursday, all but ensuring he will be crowned champion when the race ends in Paris in three days.

On the big final climb of Stage 18, the Italian broke out of the peloton, chased down breakaway riders, and rode solo in front for the last 8 kilometers (five miles) uphill.

Nibali, who captured his fourth stage of the Tour, stuck out his tongue, tapped his chest, and raised a fist skyward as he finished the 145.5-kilometer (90-mile) leg more than a minute ahead of Thibaut Pinot of France, who was second. Rafal Majka of Poland, in third, was another two seconds back.

The remarkable effort by Nibali, set to become the first Italian to win the Tour since Marco Pantani in 1998, essentially reduced the race drama to who will join him on the podium on the Champs-Elysees on Sunday.

“I didn’t want to lose command. My goal was to win here,’’ Nibali said. “It was important to me to win another stage in the Pyrenees. The team worked really hard and this victory is for them.’’

He is also set to become only the sixth rider to win all three Grand Tours of France, Italy and Spain. He won the 2013 Italian Giro and the 2010 Spanish Vuelta.

One man basking at the finish line was Alexandre Vinokourov, the general manager of Nibali’s Astana team, and a former rider who was expelled from the 2007 Tour for blood doping. He said the stage victory was “not by chance.’’

“We said, ‘We need to show that there’s a boss,’’’ Vinokourov told French TV. The last time the term “boss’’ was used regularly at the Tour was when a doped-up Lance Armstrong won seven in a row.

While three stages are left, Friday’s is mostly flat and unlikely to allow a breakaway rider to gain time.

The last real challenge will be Saturday’s individual time trial, but Nibali’s lead is so big - 7 minutes, 10 seconds ahead of Pinot, and 7:23 ahead of France’s Jean-Christophe Peraud - that it would take a disaster for him to lose the yellow jersey before Sunday.

“It was a very good day,’’ said Pinot, who rose a spot from third, “but Nibali is untouchable.’’

The race for second heated up: Alejandro Valverde of Spain lost crucial seconds on the last climb and fell from second overall to fourth, two seconds slower than Peraud. But Valverde is considered a stronger time-trial rider than Pinot, and possibly Peraud.

“Everything is possible,’’ Valverde said. “Before, I was ahead, now I’m behind, but it’s very tight. I’m pretty happy.’’

After setting off from Pau, riders tackled the famed Tourmalet pass - the highest Pyrenean peak on this Tour - before heading up to Hautacam ski station. Both climbs are among the toughest in professional cycling.

Stage 19 on Friday in southwestern France will likely end in a sprint finish, and Nibali and his Astana teammates will keep a close watch on the riders closest to him in the general classification.

They are no longer rivals, nor challengers.