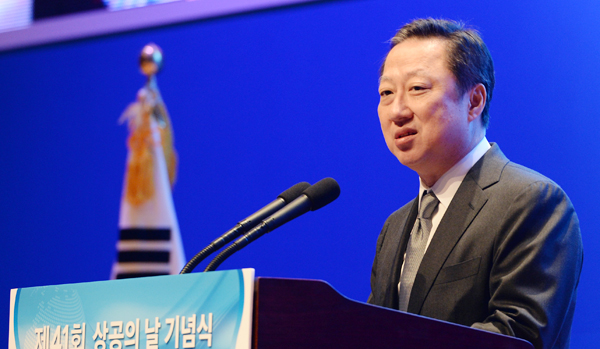 “Through thick or thin, high and low, beauty is in the eye of the beholder.”

Guests at the nuptial mass at Myeongdong Cathedral on June 12 sang the song together. The lyrics about the simple life were written by Park Yong-man, chairman of the Doosan Group and the Korean Chamber of Commerce. His second son was getting married. Compared to other CEOs, Park is a connoisseur of pleasant humor.

But at the Korcham forum in Jeju, he was serious. Hundreds of business leaders attended the forum, which also serves as a retreat. He personally rewrote the opening speech prepared by the staff. I had hoped his speech would not be the routine motivational talk, and he would maintain the spirit of a “chief entertainment officer.”

But I was wrong. “The domestic and international reality we face today doesn’t allow us to enjoy the vacation. We cannot afford to relax just for a moment,” he began. Of course, outdoor and leisure activities were for the participants to enjoy. However, their minds were not completely relaxed. The CEOs at the forum shared the concerns contained in the opening remark.

What stands in the way of a relaxed retreat for members of the Korean business community, of course, is the stasis of domestic and international markets. At the same time, they are pressured to make more investments or release money. But these moves are easier said than done. Investment is not a matter of willingness, but of opportunity.

Nevertheless, the economic authorities are pressuring the private sector to act. They applaud ambitious moves to do anything. However, it is hard to agree with the idea of pushing companies to release the cash reserves they saved up after paying all their taxes.

The key is not whether or not to tax the reserve fund. Companies agree with the goal, but are reluctant. The purpose of the policy is to encourage companies to release cash to boost domestic consumption. But the government’s order of business is wrong. First, the benchmark interest rate should be lowered. Another intent is to urge businesses to release into the domestic market money earned from exports. But it is an outdated perspective. In the past, investments were outcomes of teamwork between the Korean government and companies. But in the era of globalization, investment is a product of competition between Korean and foreign governments.

At this juncture, money would be hidden if companies are urged to make investments. The authorities must not forget that companies will be more worried and frustrated about the future if they don’t see investment opportunities.

The government’s economic team needs to play the role of “chief entertainment officer” rather than offering carrots and sticks. They should make the exhausted companies reenergized, laugh and become bolder. That’s the core of Abenomics. When you feel comfortable and relaxed, you can make up your mind.

The government must strive to vitalize, not stiffen, the economy.