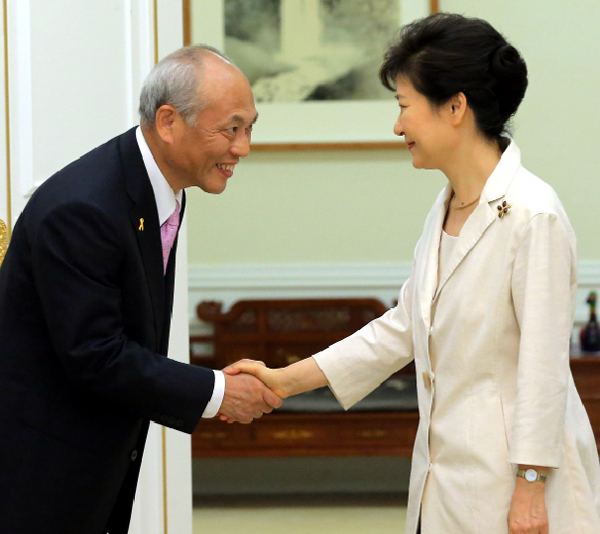 President Park Geun-hye shakes hands with Tokyo Governor Yoichi Masuzoe yesterday at the Blue House before a talk. He is the first Japanese politician the Korean president has officially received since her inauguration in February last year. [Joint Press Corps]

President Park Geun-hye met yesterday with Tokyo Governor Yoichi Masuzoe, the first Japanese politician she has officially received since her inauguration, indicating a possible thaw in the current freeze in Japanese and Korean diplomatic relations.

Masuzoe, who arrived in Seoul on Wednesday, called upon Park in the Blue House yesterday morning to relay a message from Prime Minister Shinzo Abe on improving bilateral ties between the two countries.

“I think it is regrettable that the people’s hearts in the two countries have become estranged because of political difficulties,” Park told the Tokyo governor.

“Politicians through inappropriate remarks have aggravated difficulties in bilateral relations.”

Park requested Masuzoe to help work towards a correct understanding of history, especially on the issue of the Japanese military’s sexual enslavement of girls and women during its colonial rule over Korea, “so that a stable relationship can be developed between the two countries.”

She added, “The comfort women issue is not only an issue between the two countries but an issue of female human rights.”

Park also raised the issue of hate speech in Japan that targets Koreans, and Masuzoe said he would work towards the safety of Koreans and other foreigners in Tokyo.

In contrast to when Park met Abe in a trilateral summit along with President Barack Obama in The Hague in March, Park was pictured smiling at the Tokyo governor and greeting him with a handshake.

Since relations between the neighboring Asian countries have been iced over, the governor’s visit to the Blue House raises anticipation of a possible thaw. Since President Park took office in February 2013, she has yet to hold a bilateral summit with Abe, who took office in December 2012. Such summits were customary in the past.

Seoul has pushed for Japan to take a sincere posture on the euphemistically dubbed “comfort women,” especially after the Abe administration tried to undermine the 1993 Kono Statement that apologized to the victims of sexual slavery by the Japanese military.

On Thursday in Geneva, the UN Human Rights Committee called on Japan to undertake independent investigations of wartime sex slavery and apologize and compensate the victims.

Masuzoe, a former minister of health, labor and welfare, wore a yellow ribbon badge pinned to his right breast when greeting Park, a gesture of condolence for the victims of the Sewol ferry disaster in April that claimed the lives of more than 300 people.

This marks the first visit to Korea by a governor of Tokyo in 18 years.