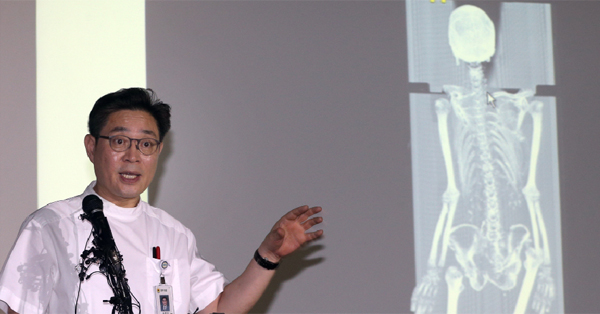 Seo Joong-seok, director of the National Forensic Service, explains the result of an autopsy on a corpse identified as the sunken ferry’s owner, yesterday at the Seoul office of the Forensics service in western Seoul. By Kim Sang-seon

Police yesterday captured Yoo Dae-gyun, the eldest son in the family behind the sinking of the Sewol ferry, at a residence in Yongin, Gyeonggi at around 7 p.m.

The son had become the country’s most wanted man after his father, Yoo Byung-eun, was declared dead Tuesday. The inconclusive result of the elder Yoo’s second autopsy was released yesterday.

The 43-year-old son and Park Soo-kyung, a 33-year-old woman who served as his bodyguard and secretary, were apprehended without resistance.

Park is a follower of the Evangelical Baptist Church, co-founded and led by the Yoo family patriarch, and the daughter of another key functionary for the Yoo family. Park is a certified Taekwondo referee.

The police found 10 million won ($9,800) cash at the residence in which the two were staying.

Police raided the residence after monitoring it since early May. 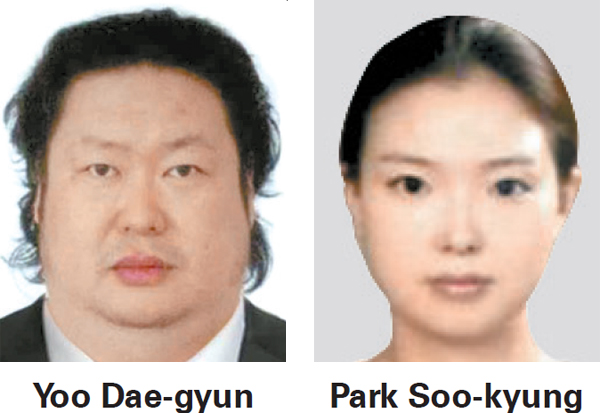 A sister of one of Yoo Dae-gyun’s aides owns the residence and she left it in late April. But police noticed electricity and water were being used.

The duo’s capture came only a few hours after the police announced they would offer favorable terms if the son turned himself in by the end of this month.

Police said the apprehended pair had not been using cell phones for a long time.

Meanwhile, the state forensic center yesterday said that it was unable to determine how Yoo Byung-eun died because his corpse was too decayed when it was found last month in an orchard in Suncheon, South Jeolla.

The result of the older Yoo’s second autopsy announced yesterday by the National Forensic Service provided few clues to the odd death of the 73-year-old, who was the most wanted man in Korea after the Sewol sank April 16, killing more than 300.

Earlier this week, police identified the body as Yoo’s, 40 days after it was found in a plum field in Suncheon, 2.5 kilometers (1.6 miles) away from a vacation villa Yoo owned and where he is assumed to have stayed in May.

The belated announcement of his death opened up law enforcement agencies to charges of total incompetence and started a tsunami of public doubts bordering on mass incredulity.

“We performed the autopsy based on some probable causes: bodily injury, poisoning, disease and other external forces,” said Seo Joong-seok, the head of the National Forensic Service.

“But it was impossible to determine the cause of death because Yoo’s body had already undergone a very advanced stage of decomposition.” he said.

As for the poison test, the state agency said that it examined parts of a lung, the liver and muscle tissue but they all tested negative or were unable to be tested.

It also said there were no traces of external force that might lead to death based on the bone structure of the remains.

In the face of widespread public incredulity and ridicule, the director of the forensic agency maintained firmly that DNA tests prove conclusively that the body is Yoo’s.

To try to address rampant conspiracy theories about the sequence of events described by authorities, the forensic center showed a series of photos of the corpse and CT images of hands during yesterday’s press conference in the Seoul office of the National Forensic Service in western Seoul. The briefing was televised.

It was a rare occasion for the forensic agency to show CT images of a dead body.

“I also felt conflicted [about revealing the photos],” Seo said, “But given the significance of the case, I decided to release them in accordance with legal boundaries because the public needs to know.”

One of the biggest suspicions among the public was the severe rate of decay of the dead body. Both police and prosecutors said that Yoo was alive through May 25 based on testimony of Yoo’s secretary and bodily fluids found at the Suncheon villa. If that is true, the body had 17-18 days to decompose before it was found in the plum orchard by a farmer on June 12.

The agency said that such a rate of decay is plausible. The National Forensic Service aired video footage showing an experiment conducted by a forensic anthropology center in Tennessee, the United States.

“In the video, a dead body almost completely turned into a skeleton within ten days and is rotted away,” said Lee Han-young, a head of Forensic Medicine Department of the National Forensic Service.

“In this case, the dead body is more severely decayed than Yoo’s dead body,” Lee continued, “A domestic experiment on animals also shows that a dead body can turn into a skeleton only within five to six days if the weather and temperature conditions are conducive.”

Three external forensic experts who participated in the autopsy expressed their views on the autopsy results, saying that the examination was conducted in a reliable way.

One of the outside experts raised the possibility of hypothermia on the grounds that the body appeared to be trying to get out of its clothes.

“Many would think that May and June are warm,” said Kang Shin-mong, a forensic expert at Catholic University of Korea’s School of Medicine, “but when it rains, older people like Yoo might feel cold.”

“And people affected by hypothermia often try to get rid of their clothes before death,” Kang said.

In the picture, the corpse is pulled up and the shoes are taken off. Despite the agency’s efforts to tame the howls of disbelief by the public, questions keep arising.

A lawmaker of the main opposition New Politics Alliance for Democracy raised suspicions that the dead body was actually discovered before the Sewol ferry disaster, citing taped interviews with five residents of Suncheon Village, where Yoo’s remains were found.

Representative Park Ji-won played the tapes at a meeting on Wednesday.

The interviews have residents saying that they discovered the decomposed body ahead of the Sewol ferry disaster on April 16.

“I interviewed five residents saying that they found the body before the ferry disaster,” Park said, “I think they [police] might have switched the bodies.”

And the blunders keep occurring.

The Suncheon Police Station found a pair of spectacles 1.5 kilometers away from the orchard where Yoo was found and 500 meters away from Yoo’s vacation villa Thursday, saying the item appeared to belong to Yoo.

But it was revealed yesterday that the glasses actually belonged to a farmer in the village.