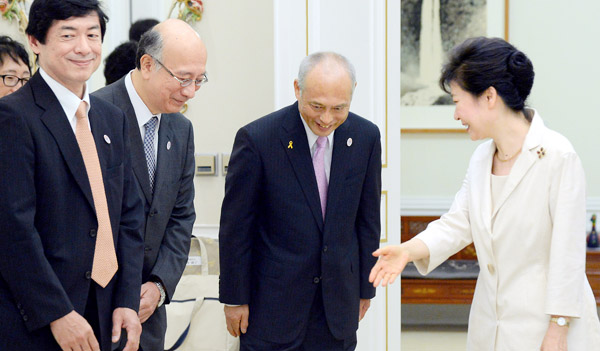 The relationship between Korea and Japan seems to be going from bad to worse. The diplomatic chill has spread onto trading turf between Asia’s oldest economic rivals and partners. South Korean Park Geun-hye and Japanese Prime Minister Shinzo Abe are more than one and a half years into their terms, and yet they cannot even arrange a summit or tolerate the other’s company without a meditator.

Much of the blame goes to the nationalistic prime minister, who has infuriated its closest neighbor with his revisionist perspective on history and past aggressions. He has also challenged the validity of the 1993 Kono Statement, reopening the investigation into Tokyo’s long-held apology in which it admitted to its military’s direct role in coercing Korean women into “comfort brothels” during World War II. The spat on the diplomatic front has also translated into losses on the economic front. Japan’s capital investment to South Korea dwindled to $2.9 billion from $3.8 billion over the last two years.

The weakening of the Japanese yen played a part, but growing hostilities and flare-ups in and between the two countries took a toll in the economic field. Japanese tourists to South Korea sharply decreased to 2.9 million last year, from 3.5 million in 2012. Enthusiasm over Korean entertainers and popular culture by Japan’s younger generation has also been watered down.

The two countries must help their economic relationship from falling victim to political and diplomatic factors, and make separate macro-economic efforts to sustain an economic recovery as well as common endeavors to keep commerce and business ties intact.

Industrial and business order in East Asia is undergoing dramatic changes due to the rapid rise of China. Trade between South Korea and China has overwhelmed Korea’s commerce with the United States and Japan combined since 2009. Korea’s trade with China reached $229 billion on a surplus of $62.8 billion last year. Trade with Japan in the same year stopped at $94.7 billion, but Korea’s deficit reached $34.7 billion.

The rule of the thumb in international commerce is not to put all of one’s eggs in one basket, because if the basket is dropped, all can be lost. The over-reliance on China in external trade could be risky for Korea. Japan has been aggressive in liberalization and free trade agreements to help reboot its sagging economy.

It plans to open up and pitch for foreign investment through the Trans-Pacific Partnership. By jumping on the Asia-Pacific regional free trade framework, Korean companies could more easily make inroads into Japan.

To place bilateral economic relationship to higher level, the two countries must expand capital investment in one another.

Japan has already produced 13 Noble laureates from the science and tech field. I have always been awed by Japan’s technology labs and high-tech industrial sites. Japan is unrivalled in chemical material and parts technology, such as carbon fibers and organic light-emitting diode. Korean companies can learn more from Japanese science and technology firms seeking business opportunities here.

External commerce strictly chases profit. The Chinese boycotted Japanese products and damaged Japanese shops amid war-like tensions over a territorial dispute in the South China Sea. Yet Japan’s direct investment in China reached a record-high of $13.5 billion in 2012 and $9.1 billion last year, more than tripling its investment in Korea.

Japanese businessmen all agree economic ties with Korea must be strengthened regardless of political and diplomatic tensions. Many Japanese are opposed to Prime Minister Shinzo Abe’s decisive turn toward the right in foreign and military affairs.

The Financial Times recently reported that Korean and Japanese firms are joining hands to seek business opportunities in the resource-rich Far East of Russia, after Beijing and Moscow reached a landmark $400 billion deal to supply Russian gas to China through joint development for 30 years. Japanese companies have constructed large-scale plants to produce carbon fiber from Gumi and Samangeum industrial parks in Korea.

They cited business confidence through long years of successful business ventures and high-quality labor and infrastructure environment for their investment. Korea and Japan are also ideal partners in shipping logistics. The route between Busan and Gwangyang ports in Korea and Kobe, Japan, can serve as lucrative shipping and storage hub in the region.

The two countries will celebrate a half-century of normalization of diplomatic ties next year. Just because the two state heads are not on talking terms, ties on the civilian, corporate and private levels should not be disturbed.

Korea and Japan are the most advanced free and capitalist economies in Asia. They must use their reciprocal business partnership to help change the hostile air between them. Korea and Japan may never be close in terms of historical issues, but they still can be close in trade and investment.

* The author is a professor at Chung-Ang University and the Foreign Investment Ombudsman at the Korea Trade-Investment Promotion Agency.