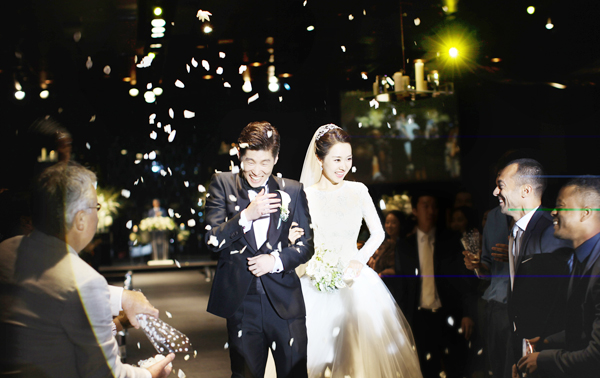 Several local football players and those in the broadcasting industry attended the ceremony.

SBS news announcer Bae Sung-jae, a mutual friend of the couple, served as the emcee at the wedding.

It was previously reported that Bae had intended to have the footballer and the sports newscaster meet earlier.

The couple was first introduced in 2011, though their relationship only became romantic last year. Since then, they have arranged family meetings on Jeju Island. They also shot wedding portraits prior to their big day.

Park announced his retirement from football in May. It has been rumored that he has been preparing to study abroad in the United Kingdom. He was the first Korean player to join a Premier League team in England in 2005, playing for Manchester United for about seven years.

The bride, who started working at SBS in 2010, quit her job in March.