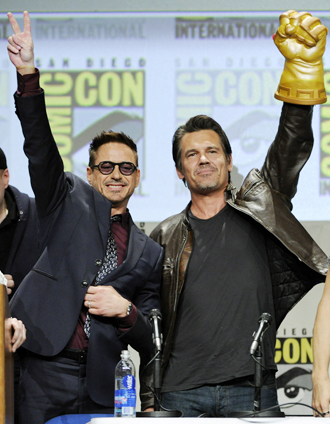 Actors Robert Downey Jr., left, and Josh Brolin pose during the Marvel panel Saturday at Comic-Con International in San Diego. They and other cast members of “The Avengers,” including Chris Evans, Chris Hemsworth, Samuel L. Jackson, Jeremy Renner and Mark Ruffalo, came to Comic-Con to debut initial footage from the upcoming superhero sequel, “The Avengers: Age of Ultron,” which is set for release in May 2015. [AP/NEWSIS]