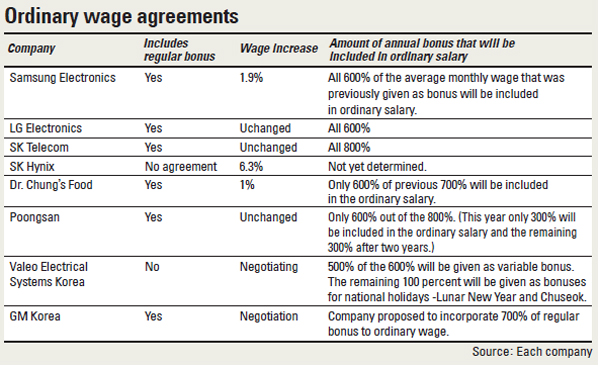 LG Electronics is currently in a dilemma.

As G3 smartphones gained popularity, employee overtime became inevitable. On top of the extra money the company has to give its employees, there is an additional burden.

In negotiations with its labor union, the company agreed to include the year-end bonus as part of the employee’s annual salary. Until now, the company has regularly provided 600 percent of employees’ average monthly paychecks as bonuses at the end of the year. Adding overtime pay as well as the increased monthly salary, the financial burden on the smartphone manufacturer has risen.

The bonus negotiation is the result of a Supreme Court ruling last year that any regular bonuses should be considered as part of the annual wage.

Since the conclusion of negotiations, according to the company, paychecks of employees on the production line have gone up 10 percent. In addition, an increase in ordinary wage also leads to an increase in overtime pay and retirement compensation.

Because of the higher labor cost, the company, which should be happy about the rising popularity of its G3, is reluctant to extend factory operation hours.

“We’re managing the situation by trying to cut back on overtime production of products whose seasonal demand is currently low like refrigerators,” said Hwang Sang-In, senior managing director of labor and management relations at LG Electronics. “We also could be faced with difficulty in management of the work force if there is a huge spike in wages due to overtime.”

The situation of a company that wishes to be referred to only as “D” is in a similar situation.

Since June, the company decided to limit overtime to 52 hours a month and plans to expand the cap to all of its production affiliates. The decision came after related departments in the company estimated labor costs could increase 20 percent when including the year-end bonus in annual wages.

But D company hasn’t limited overtime hours at its manufacturing affiliates that might need the leeway to respond to a spike in demand.

As total wages dramatically increased due to inclusion of bonuses, companies are seeking short-term solutions such as cutting back on performance-based bonuses and overtime.

Experts say the problem is that companies could start adopting a system of paying a fixed salary to employees that is based on length of service rather than performance. This is a system that was popular in the 1970s and 1980s. Additionally burdened by the high labor cost, companies will be hesitant to hire.

But such a system could affect companies’ performance.

“When returning to paying employees based on length of employment, companies would be faced with a situation where productivity doesn’t affect pay,” said Lee Ji-man, professor at Yonsei University School of Business.

The burden will rise even further as the retirement age is extended.

Valeo Electrical Systems Korea adopted a system under an agreement with its labor union where it wouldn’t reflect all of the year-end bonuses in ordinary wages and hand out the remainder as bonuses during national holidays like Chuseok.

Some companies have decided to limit new hiring.

“Global market orders have gone up largely because of the rapidly improving economy in China,” said an official at a heavy industry company who asked to remain anonymous. “However, if we make new hires on the back of growing demand, it would be difficult for us to handle the situation when business sours.”

The labor management conflict surrounding ordinary wages is worsening. At the end of June, only 17.5 percent of companies 100 employees or more had agreed on contracts , less than half of last-year’s 37.7 percent.

“At the moment, it is likely negotiations will continue even after Chuseok,” said an official of Hyundai Heavy Industries and Hyundai Motors.

“As wage compromises are not successful, a great number of companies cannot even estimate this year’s profits,” said Lee Hyung-joon, director of labor policy at the Korea Employers Federation.