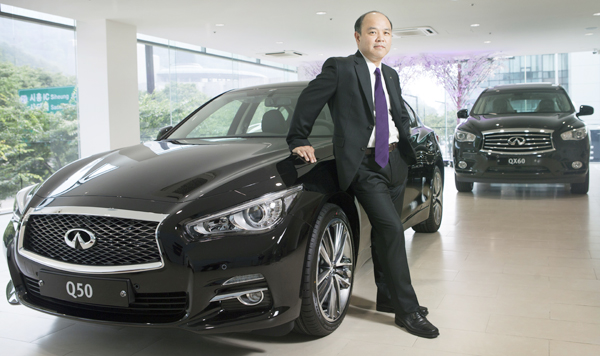 Nissan Korea CEO Takehiko Kikuchi looks like one of those middle-aged men you commonly see in Korea. In fact, this short, half-bald 46-year-old likes to explore Seoul on the weekends, taking subways and walking with his wife, so there is an actually a chance readers may have passed him on the street.

The first impression of Kikuchi, who celebrated his one-year anniversary as Nissan Korea CEO earlier this month, is not what you would call charismatic. Maybe because of his Japanese DNA he is more of a gentle and delicate leader.

With 23 years of experience at Nissan in sales and marketing at Nissan, what Kikuchi achieved here in a single year is impressive.

According to data from the Korea Automobile Importers and Distributors Association, Nissan sold 2,091 units in the first half of the year, up 49.3 percent from a year earlier, while its luxury brand Infiniti sold 1,359 units, a whopping 213.9 percent increase.

This is in contrast to the performance of Japanese rivals Toyota and Honda, in which first half sales plunged more than 30 percent. You see, Kikuchi, a Waseda University graduate, doesn’t want Nissan and Infiniti to be categorized as “Japanese auto brands.” He wants consumers to think of them as international auto brands that are beloved around the world.

With the Nissan Qashiqai compact crossover scheduled to be launched in the second half and Infiniti continuing to prosper with its Q50 sedan, Kikuchi expects the company to reach its 2014 sales goal in Korea of Nissan selling 4,500 units and Infiniti retailing 3,000.

Q. Now that you led Nissan Korea over a year, what have you learned about Korea’s auto market?

A. Korea is one of the markets in the world where competition is fierce. It is also where local automakers take more than an 85 percent market share. Korean consumers are demanding customers as they closely check cars from performance to design, so I am learning and getting good experience here. But I think local automakers taking over an 85 percent share provides another opportunity for us . Since we have a varied product lineup, we can provide products that are something different and what customers really want.

Based on my experience, Korea is more similar to China, since people’s car replacement time is short and many think of automobiles as an expression of their status. Just like China, you can see many expensive large cars on the streets. But while there is a demand for big cars, there is also a rising demand for cars to show consumers’ lifestyles and personal characteristics. We are focusing more closely on the latter.

Infiniti is the first Japanese automaker to bring a diesel sedan into Korea, while Nissan is also preparing a diesel crossover, the Qashiqai, this year. However, the imported car market here is still dominated by the Germans, who have strong and varied diesel models. Does Nissan Korea have a strategy to challenge the German brands?

In this market, we are not only competing with German brands. I would like to say that our strategy is focused more on how to expand our shares in this competitive market. After all, what’s important is how are we doing on the basic stuff, which is introducing the proper products at the proper time with a proper price. The second most important thing is to expand our network to enhance customer service. My job is to let these processes come about in the best combination. Many people asked me, “How will you challenge the Germans when you go to Korea?” But even if I say I will catch up with the Germans next year, I know no one is going to believe it (laughs). So, Nissan will focus on the things that we can do best and keep pushing our strategy.

Nissan now sells the Leaf electric vehicle on Jeju Island. What’s your take on the EV market? Do Nissan and Infiniti focus more on EVs or hybrids?

As you know, what’s important for EVs is the infrastructure. As its driving range is roughly 200 kilometers (125 miles) or more, if there are not enough charging stations, it is difficult to drive a long distance. But on Jeju Island, I think the infrastructure is ready, so the EV market there will develop intensively. Nissan has a full product lineup of gasoline, diesel, hybrid and EV models, but ultimately in the future, it will end up with EVs. Hybrids are produced for the transition to EVs. As consumers realize the EV is more economical, hybrids will no longer have meaning.

The question is when this will happen.

From left: Kikuchi introduces the Nissan Qashqai for the first time in Asia at the Busan International Motor Show on May 29; Kikuchi works with employees of Greennae, a job training facility for disabled people, after donating winter uniforms in December; a picture drawn by disabled children is displayed at a showroom in Seoul as part of the company’s CSR program “Draw your Dream with Nissan Korea”; Kikuchi and Nissan Vice President Billy Hayes introduce the world’s best-selling electric vehicle, Leaf, in Jeju in March. Provided by the company


Google is tapping into the auto market and it seems cars converging with IT is inevitable. How is Nissan responding to the development of autonomous cars?

Nissan recently announced that it will release autonomous cars for intersections by 2020. Ahead of that, Nissan is targeting the release of cars that can be driven autonomously on congested highways by the end of 2016, so we do have technology for autonomous cars. Currently, we are researching with MIT and Stanford University on this technology. Since we don’t know how this technology will develop, we are focusing to establish expanded networks to prepare for any possible situation. It will take some time to bring such cars into Korea. Remember that our autonomous cars to be developed by 2020 are not completely driverless cars, but they will help drivers in stressful situations by taking over things automatically. For completely self-driving cars, it will take much longer.

Japanese cars are selling well in Korea, but in contrast, Korean auto brands like Hyundai or Kia are not doing well in Japan. Why?

I think Korean automakers just can’t match the product lineup in Japan. If you look closely at the Japanese market, citycars account for 40 percent, and Korean automakers don’t have good models in this segment. About 20 percent is minivans - which are different from American-style minivans - and Korean automakers also lack good models here. The Japanese auto market is developing to be comprised of citycars, minivans, hybrids and imports. But even in hybrids, Korean automakers are weak. To succeed as an import, they also lack a premium image. In Japan, imported vehicles represents status for the owner. This is reason why Germans cars are strong among imports. Not only for Koreans, but in general, Japan has become a market that is difficult for foreign brands to invade. A sales network is also a difficult thing for imported car companies to succeed in. In Japan, it is common to see relationships between customers and salespersons to last for 20 or 30 years.

What can Korean automakers learn from Japanese automakers? Some people say that Korea’s militant labor union is the main thing holding back local automakers from becoming leaders in the world.

What’s important for automakers is to develop innovative technology that can lead the global market. Although we are still developing, Japanese automakers are known for hybrids and electric vehicles in the global market. So, Korean automakers also need to put continuous effort into technology development to be recognized as leaders in some aspects. In addition, in a global world, we know expanding overseas can be profitable and local production becomes essential. But if the home labor union is strong, it is difficult to execute this plan.

Currently, relations between Korea and Japan are not so great. Do the Japanese government’s actions affect your business?

As a businessman, I would not comment on political issues. But as I said before, we want Nissan and Infiniti to be recognized as international brands, not as Japanese brands. As a company, our role is to focus on delivering good products and joy to Korean customers. Our employees work hard, we make profits and pay taxes to this country. I heard Korean people like Japanese animation characters like Doraemon, so this tells you that Koreans aren’t hostile to Japan in every way. They do have friendliness for Japan, so I think it will work out.

In recent years, Korea has been opening doors to foreign countries with free trade agreements. How do you rate this?

It’s difficult to calculate the impact of FTAs in figures, but through FTAs, Korean customers have had various choices. The big benefit of FTAs is that not only tariffs are reduced, but regulations on emissions and other safety standards become compatible with other countries.

You know, automakers don’t only develop a car for Korea. If such standards become compatible, it becomes easier for foreign automakers to release new models. Personally, I would like to see a Korea-Japan FTA soon because it would provide many more choices to customers. Since the two countries are geographically close, there will be a big benefit in cost management, too. Delivering a car from Nissan’s Kyushu plant to Seoul is closer than delivering it to Tokyo. 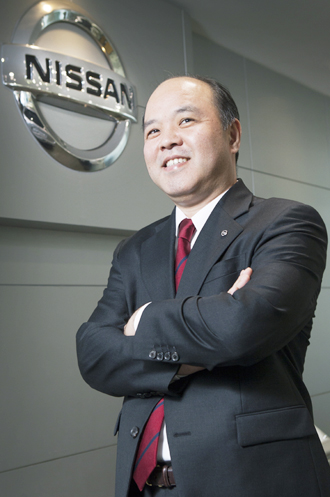