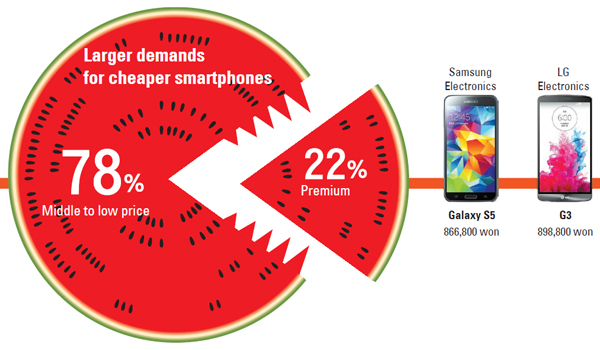 For those who felt Koreans don’t have enough options for cheaper smartphones, things could change soon.

“I picked the more reasonably priced smartphone because the functions weren’t too different,” he said.

“There are more people looking for mid-priced phones without all the fancy specifications, probably because those smartphones nowadays have high levels of performance,” says Lee Jin-woo, manager of an SK Telecom store in Euljiro, central Seoul.

In the global market, cheaper smartphones have a larger share than premium devices, and Korean companies are coming up with more options for reasonably priced phones.

According to Strategy Analytics, smartphones with wholesale prices of $300 or more were 36.2 percent of the world’s smartphone market last year and the market share of high-end smartphones was estimated at 24.1 percent, which leaves 75.9 percent for mid-tier or low-end smartphones.

Forecasters predict that an excess of 268 million high-end premium phones, 319 million mid-tier phones and 599 million low-end phones will be sold this year. That represents a 22.4 percent decrease in high-end smartphones, with low-end and mid-tier smartphones accounting for 77.6 percent of sales.

The change in demand explains why low-end phone producers from China and Europe can challenge Korea’s major electronics companies and other high-end smartphone manufacturers like Apple.

LG Electronics continues with its F and L series, while releasing the G3 Beat, a lower-priced version of its G3 smartphone. G3 Beat resembles G3 closely in its design and core functions and has a Gesture Shot feature that snaps selfies three seconds after the subject clenches his or her fist in front of the device.

“We’re a global corporation, and we need to get a hold on the low-end, mid-tier smartphone market that represents 80 percent of the market,” said an LG Electronics Mobile Communications official. “If China uses a bottom-up approach with its low-end phones, we’ll challenge that with a top-down strategy.”

Much of the advertising, however, will continue to focus on the premium phones that generate bigger profits and are linked to the company’s image.

“We may not mention it even if we’re increasingly producing mid-tier smartphones, but we are coming up with various portfolios of different models and are actively working to satisfy the demands of the global market,” said an official from Samsung Electronics’ IT Mobile Division.

Low-end and mid-tier smartphones also should get a boost from the end of illegally high subsidies that telecommunications companies gave on multiyear contracts. Samsung’s Galaxy S5 carries a retail price of 866,800 won and LG’s G3 is 899,800 won, but excessive subsidies and multiyear contracts cut the prices nearly in half.

When the Mobile Device Distribution Act goes into effect in October, mobile carriers must disclose the subsidies to consumers, and companies will no longer be able to give extra subsidies under the table.