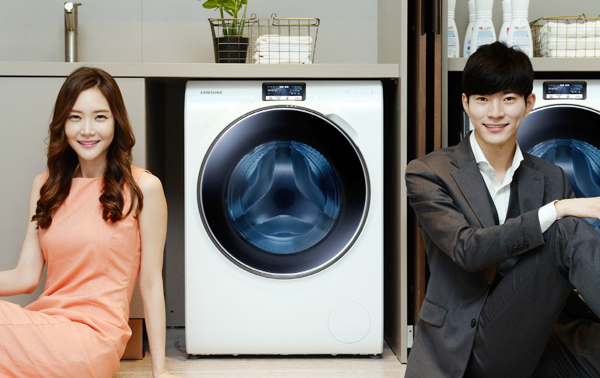 Samsung Electronics, which is seeking to diversify its portfolio beyond smartphones, is getting encouragement for its highly acclaimed washing machine, the WW9000.

Expert Reviews, a British magazine specializing in the ICT industry, gave the product a perfect five-star rating and has also put it on its recommended list. The website has about 5.2 million views per day.

“There’s no denying that this is the most technologically advanced washing machine that we have ever seen,” Expert Reviews said in a comment about the Samsung appliance. “The touchscreen makes it incredibly easy to configure, but it’s brilliant that you can also turn it on and operate it from anywhere using your smartphone.”

First launched in March in Europe, the WW9000 has received positive reviews worldwide. It received a top award at the Appliance World Expo in Shanghai the month it debuted. The AIPULAN award is nicknamed the “China home appliance Oscar.” The washing machine also won the Grand Prix de l’innovation award at Foire de Paris in France in May and a bronze award at the prestigious U.S. International Design Excellence Awards.

The WW9000 features a full-color 5-inch LED touchscreen and comes with Smart Control, so the users can remotely control and monitor the machine using their smartphones.

It also cuts back significantly on washing time. Using its super speed wash setting, a heavy load of clothes can be washed in less than an hour, the company says. It saves time by pumping water in quickly from a twin water supply and shortening the rinse cycle with its speed spray feature, according to Samsung.

The machine uses a three-way vibration sensor to keep shaking to a minimum. As a result, the noise is low, at 72dB during spin and 46 dB during washing. “That’s remarkably quiet, particularly for such a [big] machine,” Expert Reviews said.

Samsung also went for a new design, giving the machine a blue door, which is a notable change from other predominantly white washing machines.

“Samsung’s premium drum washing machine, the WW9000, is getting attention worldwide for its innovative features and designs,” said Cho Yong-cheol, a senior vice president of Samsung Electronics’ home appliance business division. “Thoughtful of the user’s convenience, it is an ahead-of-its-time washing machine.”

The laundry machine was manufactured under the direct leadership of Samsung Electronics President Yoon Boo-keun, also known as Mr. TV for his successful management of the company’s TV business.

“The product reflects the hard work and thinking of President Yoon, who has helped maintain Samsung’s No. 1 position in the global TV market for eight consecutive years,” said an official of Samsung Electronics.

Samsung is No. 3 in the global washing machine market with just over 10 percent market share, the company said in a report earlier this month.