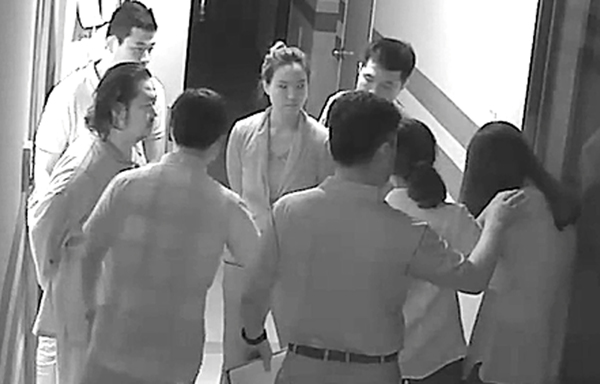 An excerpt from the CCTV footage of police capturing Yoo Dae-gyun, left, the eldest son of the family behind the Sewol ferry accident, and his bodyguard Park Soo-kyung, middle, at a residence in Yongin, Gyeonggi, Thursday. Provided by Incheon Metropolitan Police Agency

The prosecution yesterday requested arrest warrants for Yoo Dae-gyun, 44, the eldest son in the family behind the operator of the Sewol ferry, and two others who helped him in his escape.

“We requested an arrest warrant for Yoo because the amount he embezzled and the money he illegally obtained is huge and he went on the run for a long time,” Kim Hoe-jong, a prosecutor from the Incheon District Prosecutors’ Office, said at a briefing yesterday.

The prosecution is also seeking warrants for Park Soo-kyung, 34, Yoo’s secretary and bodyguard who assisted him on the run until they were arrested by police Friday at a residence in Yongin, Gyeonggi, and Ha Bo-eun, 35, who hid Yoo and Park in the home she used to live in and provided them with food, said Kim.

After the Sewol ferry sank April 16 off Korea’s southwestern coast, killing more than 300 people, the 73-year-old patriarch of the business, Yoo Byung-eun, and his family were pinpointed as key figures behind the accident.

Yoo Dae-gyun is considered a relatively less important suspect in the investigation into the family, as the amount he embezzled and the money he acquired through various malpractices totaled 9.9 billion won ($9.64 million), far less than the sums acquired by his deceased father Yoo Byung-eun (129.1 billion won), his younger brother Yoo Hyeok-gi (55.9 billion won) and his sister Yoo Seom-na (49.2 billion won).

However, after Yoo Byung-eun’s dead body was found on June 12, the patriarch’s eldest son suddenly became the only person who could explain how the family was able to stay on the run for three months as the prosecution and police pursued them in vain.

The prosecution is currently trying to prove that the family, led by Yoo Byung-eun, is responsible for the accident so that the government can be compensated for the expenditures it put forward to handle the accident.

Park Soo-kyung, who stayed at the residence in Yongin with Yoo Dae-gyun for more than three months, is the daughter of Shin Myeong-hee, 64, a follower of the Evangelical Baptist Church, the Christian sect Yoo Byung-eun co-founded in the 1960s. Better known as Shin Eomma, or Mother Shin, she turned herself in to the Suwon District Prosecutors’ Office on June 13.

The 33-year-old bodyguard is also known to be a believer of the sect, known as Guwonpa, or the Salvation Sect. She is reportedly going through divorce proceedings with her husband, another believer.

She currently works as the vice chairperson of the female affairs committee at the Kyunggido (Gyeonggi) Taekwondo Association and has 20 years of experience as a taekwondo athlete and referee. Park once demonstrated taekwondo moves back in January with 24 other professional athletes at Geumsuwon, the sect’s headquarters in Ansan, Gyeonggi.

The news was a surprise to those who were once acquainted with Park.

“We had no idea that she was related to Guwonpa or in the middle of a divorce suit,” said Lim Yi-su, the deputy head of the public relations team at the Korea Taekwondo Association. “She wasn’t really national team material as an athlete, but she was recognized as a referee. She was also popular for her positive and considerate behavior.”

The apprehension of Yoo and Park has once again shed light on the lax cooperation between the prosecution and the police. The issue was raised after authorities failed on May 25 to find Yoo Byung-eun when they searched the villa in Suncheon, South Jeolla, where he was hiding, and again when the police found the 73-year-old’s body on June 12 just 2.5 kilometers (1.5 miles) from the same residence.

The police have come under fire for failing to properly identify him in the first place, despite the obvious signs. Furthermore, their delay led to a critical loss of evidence. By the time his body was discovered, it was nearly completely rotted and covered with maggots. The belated announcement of his death also opened up law enforcement agencies to charges of total incompetence and started a tsunami of public doubts bordering on mass incredulity.

This time, the police reportedly learned of Yoo Dae-gyun’s whereabouts two weeks earlier but did not alert prosecutors. As police officers were surrounding the residence in Yongin, the prosecution was announcing that they would factor in whether the fugitive son turned himself in within the month.

Guwonpa was scheduled to publicize its largest weeklong religious gathering that commenced on Saturday, though organizers abruptly canceled their announcement, saying it wouldn’t be appropriate to have reporters present while believers mourned the “sad news of Yoo.”

The police investigating the scene where Yoo Byung-eun’s corpse was found also said yesterday that they had discovered a 111-centimeter (3.6-foot) cane that he had reportedly carried with him while on the run. The object was found in a valley 30 meters (98 feet) from where the body was found.

The police apparently found a cane with the 73-year-old’s body on June 12 but lost it while they were moving his belongings to the morgue.

They are unsure whether the cane found yesterday was the same one originally found in June and are currently questioning the officers who were dispatched to the scene.

After failing to find any critical evidence at the scene, the police yesterday cut the grass in and around the area and combed through it to look for additional evidence. So far, no new discoveries have been made.