Behind Ryu, L.A. sweeps into the lead in NL West

Behind Ryu, L.A. sweeps into the lead in NL West 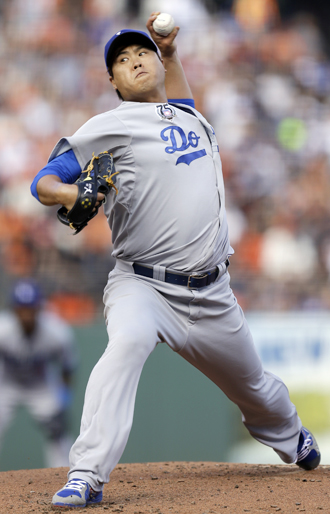 Carl Crawford hit an RBI triple to back Ryu Hyun-Jin’s third straight victory, and the division-leading Los Angeles Dodgers completed a sweep of the San Francisco Giants with a 4-3 win Sunday night.

Ryu (12-5) moved to within two wins of his rookie total last year and improved to 4-1 in five outings at AT&T Park, where in one dominant weekend the Dodgers made quite a statement to take over the NL West’s top spot.

In his Giants debut, Jake Peavy threw a pair of wild pitches in the fifth as the Dodgers went ahead on Hanley Ramirez’s RBI single ahead of Crawford’s triple to the corner in deep right field.

Matt Kemp singled twice and the Dodgers leave the Bay Area with a 1 1/2-game division lead after outscoring the Giants 17-4.

Ryu struck out seven in six innings and improved to 8-2 in 11 road starts. Kenley Jansen followed scoreless innings by J.P. Howell and Brian Wilson for his 30th save.

Peavy (0-1) pitched a day after being traded from the Boston Red Sox to the Giants for a pair of minor league pitchers, reuniting him with former manager Bruce Bochy. Peavy pitched for Bochy and the Padres in the playoffs in 2005-06.

Bochy stuck with the right-hander to get through the sixth after he allowed a leadoff walk to Juan Uribe. Peavy drew regular roars from a lively sellout crowd at AT&T Park as fans found plenty to cheer about after a frustrating few days.

Peavy dropped to 14-3 with a 2.28 ERA in 26 starts against Los Angeles, including a three-hitter last Aug. 25 at Dodger Stadium in which he struck out five and walked one.

Second baseman Dan Uggla committed two errors, including one that helped tie it early after he scored the game’s first run in the bottom of the third.

Uggla’s fielding error leading off the top of the fourth allowed Ramirez to reach and Uribe later singled in the tying run.

The Giants lost for the 19th time in their last 25 home games.