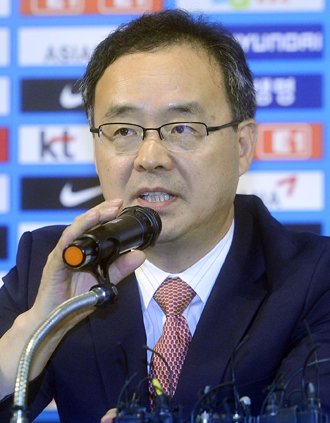 The Korea Football Association’s (KFA) new technical committee chief, Lee Yong-soo, said the next national team coach should have a wealth of experience in running a team club and have a good track record.

The 54-year-old Lee was appointed last week to head the football governing body’s technical committee after it was strongly criticized by football analysts and fans for its complete failure to support the national team in the Brazil World Cup.

He held a briefing yesterday morning at KFA headquarters to present the new members of the technical committee and his plans for running it. But the biggest concern was how and when the KFA will select a new coach. Lee said that he hasn’t discussed the issue with his committee yet, but he listed some of his requirements for a coach.

“I want to make it clear that the following is a personal opinion since I haven’t discussed the issue with committee members yet,” Lee said. “But I think the new coach whom we will select must have led a club team for a large part of his career and [must be] someone who has achieved good results.”

Lee said that club experience is important because it means that the coach can adapt to and experiment with new football trends.

“What I saw in the Brazil World Cup was that Korea was far behind the world’s football trends,” he said. “When we looked at some strong nations’ football style, they first developed a strong defense, and then their top three or four attackers made a very quick and sharp counterattack with great speed and individual skills whenever they intercepted the ball. Korean players have great speed just like other players in the world, but their individual skills need to be improved.

“I want someone who can help our players adapt to new football.”

However, Lee said he hasn’t decide whether the new coach should be Korean or not.

“There have been tons of news reports that I want a foreign coach, but I haven’t made a decision because I need to discuss the issue with committee members first,” he said. “It is true that the KFA has received many resumes from everywhere, but I haven’t even seen them yet. We will first narrow all the candidates down to 30 to 15 each for Koreans and foreigners, and will discuss them at the National Football Center in Paju on July 30.”

Lee said that he is willing to hire a coach before September’s friendly matches, but that he wants the coach to watch the matches from the audience so he can learn about the Taegeuk Warriors’ style of play.