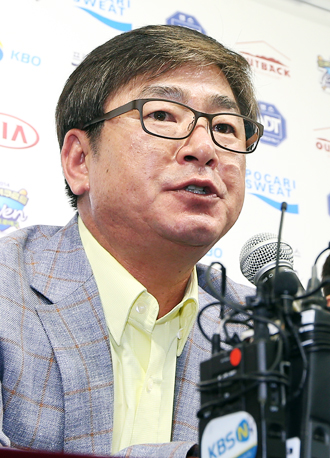 Samsung Lions Manager Ryu Joong-il yesterday announced his 24-man roster for the Asian Games in September that will include 11 pitchers.

Ryu made the announcement at the headquarters of the Korea Baseball Organization in Gangnam District, southern Seoul, after meeting with his technical committee.

One of the biggest surprises was the catcher. Yang Eui-ji (Doosan Bears/.310 batting average), one of the best-hitting and defensive catchers in the KBO, was bypassed in favor of Kang Min-ho (Giants/.220) and Lee Jae-won (Wyverns/.383).

“We once considered bringing three catchers, but decided on one more infielder,” Ryu said. “Kang has struggled this season, but still is the best catcher with big-game experience. Lee is the best offensive catcher in the league.”

For the infield positions, Ryu picked the league’s best slugger, Park Byung-ho (Heroes), who had 31 home runs as of Monday, at first base. At second will be Oh Jae-won (Bears) over Seo Gun-chang (Heroes), who is one of the league’s best leadoff hitters, and shortstop Kang Jung-ho (Heroes). Kang is expected to play third base in the Asian Games as Ryu also picked defensive shortstop Kim Sang-su (Lions).

“I chose Oh for second base because he can basically play anywhere in the infield, while Seo plays one position,” said the manager.

In the outfield are Kim Hyun-soo (Bears) in left, Sohn Ah-seop (Giants) in right and rising star Na Sung-bum (NC Dinos) in center. Since all three hit from the left side, Ryu and the technical committee added right-handed hitters Min Byung-heon (Bears) and Na Ji-wan (Tigers).

“Our goal is to win a gold medal,” Ryu said. “I think our biggest rivals in the event will be Taiwan and Japan.”