Hollyhock flowers, featured in a painting by local artist Hong Ji-yun at Seoul Arts Center’s Calligraphy Museum, is what Silla-era scholar Choi Chi-won often enjoyed looking at when he was studying abroad in the Tang Dynasty at age 12. Provided by the center

Koreans began studying abroad as early as in the Silla era (57 BC-AD 935), proven by the fact that scholar Choi Chi-won (857-?) traveled to the Tang Dynasty for education when the former nation was powerful in East Asia.

To better understand the life of the talented youngster, who failed to spread what he learned overseas due to Silla’s caste system, Seoul Art Center’s Calligraphy Art Museum is presenting an exhibition of works by current artists inspired by Choi. Many local artists gathered to recreate the ideas Choi had about his life and country.

Choi was an intellectual who did not discriminate against teachings from different ideologies, including from Confucius and Buddha, and other indigenous ideas from the Korean Peninsula. The concept of combining all those different ideas is called pungryu and was first defined by Choi.

The scholar initially went to the Tang Dynasty at age 12 and became the country’s foreign official at 18. He returned home to save the ailing kingdom at 28, but local aristocrats neither took his advice nor followed his lead. There is no record of Choi after he turned 52, and some put forward the mystical theory that he had become a god after rising into heaven from Mount Gaya in South Gyeongsang. 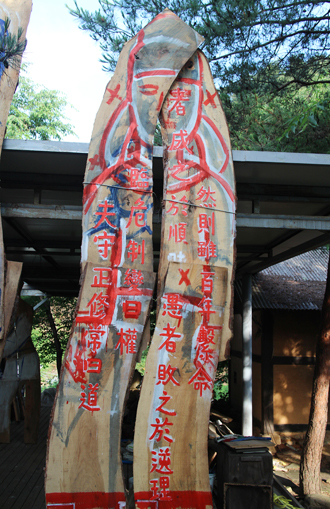 “Pungryu is a culture we need to relearn by tracing the roots of [Choi’s] existence and work,” said Lee Dong-guk, a curator of the calligraphy museum, during a press preview last week. “So we prepared a chance to trace the history and communicate with the past as local artists recreate what’s left of Choi.”

The artists come from various genres. Performers, sculptors, painters and calligraphers all joined together to break through the barriers of artistic genres to create something all-encompassing, just like Choi tried to embrace different ideologies to reform politics.

The exhibition may seem a hodgepodge to some visitors, as one corner shows a video creation while another room hosts a gigantic wooden sculpture.

“The idea raised by Choi can still be valid as current generation is trying to combine Western and Eastern cultures, just like Korea is trying to spread its K-pop and other trends to the countries across the world,” said Lee.