In politics, it’s the framing that matters

In politics, it’s the framing that matters 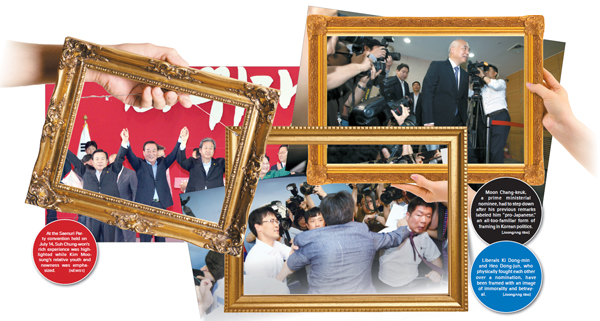 Framing, or the way certain ideas are represented, appears to be the strongest weapon in Korean politics today. Right: At the Saenuri Party convention held on July 14, Suh Chung-won’s rich experience was highlighted while Kim Moo-sung’s relative youth and newness was emphasized.[NEWS1] Left: Moon Chang-keuk, a prime ministerial nominee, had to step down after his previous remarks labeled him “pro-Japanese,” an all-too-familiar form of framing in Korean politics. [JoongAng Ilbo] Bottom: Liberals Ki Dong-min and Heo Dong-jun, who physically fought each other over a nomination, have been framed with an image of immorality and betrayal. [JoongAng Ilbo]

The political scene in Korea ahead of the by-elections tomorrow is almost reminiscent of war. And it appears the strongest weapon is what’s called “framing.”

As defined by scholars, framing is structuring ideas that influence how we see the world, which eventually determines how we act.

Framing may be an unfamiliar term for some, but in politics it’s not. There’s even the saying, “If you want to seize power, seize the frame first.”

So how does framing work? Here’s one example: Ever since the New Politics Alliance for Democracy party nominated Kwon Eun-hee to represent the southern city of Gwangju in the July 30 by-elections, the conservatives have criticized the liberals, saying that the NPAD returned Kwon’s favor with the nomination.

Kwon was the policewoman who alleged that she was pressured to go easy on the National Intelligence Service in the investigation of its illegal online smear campaign against the opposition party in the presidential election campaign last year. It was one of the scandals that caused the ruling Saenuri Party to lose popularity.

Kwon was offended by the criticism, calling the allegation “ridiculous.”

But such remarks made conservatives smile. “Our tactic [of framing] is working to our gain,” one source within the Saenuri said. The source predicted that the Saenuri would win this framing game, having called into question Kwon’s nomination while also associating NPAD lawmakers Ki Dong-min and Heo Dong-jun with immorality and betrayal.

Ki and Heo, friends of 20 years who fought for democracy as student activists in their younger years, caused a scene earlier this month by physically fighting at the National Assembly over the July 30 by-election nominations.

Framing was also evident between candidates Suh Chung-won and Kim Moo-sung at the Saenuri party convention held July 14. Slogans like “Suh Chung-won Means Loyalty” associated Kim with unfaithfulness based on his formal comments that disagree with conservative ideas. Supporters of Kim, however, used slogans like “Past or Future, You Choose” to highlight Suh’s allegedly outdated political gestures.

One of the latest figures to have fallen victim to political framing is Moon Chang-keuk, a former JoongAng Ilbo editor and prime minister nominee.

By studying the whole process - from when Moon was nominated to when he stepped down - you can learn just how a frame is formed and how it factors into the political world.

The day after the Blue House announced the nomination, KBS raised the curtain on Moon’s allegedly pro-Japanese stance. KBS reported that Moon had commented that he believed the Japanese colonization was part of “God’s will,” referring to Japan’s 1910-45 colonial rule over Korea, which many Koreans still bear deep resentment about.

More media reports followed, revealing other remarks by Moon such as “Japan doesn’t have to compensate ‘comfort women,’?” alluding to women from Korea and other countries who were forced to serve as sex slaves at front-line brothels.

As seen in the Moon case, taking a few phrases or sentences out of a complex context and oversimplifying or emphasizing the scandalous parts is typical of political framing.

People were furious when they learned of the comments, despite the fact that they were fragmented. Some, including some members of the ruling Saenuri Party, called on him to step down.

One poll said that 70 percent of the Korean people believed Moon was not suitable for the prime minister position. This part - the formation of social consent - is called the “manufacture of consent.”

Although some people later pointed out that media reports took certain remarks out of a larger picture and edited them to Moon’s disadvantage, it was too little too late to overturn the tide.

The power of framing

Why are people so easily swayed by political framing that is clearly biased?

“It’s because framing is one of the most effective tools for processing one’s thoughts,” said Kim Won-yong, a professor of digital media studies at Ewha Womans University.

“Brain studies in the 1980s concluded that men are cognitively lazy, as they want to enjoy their daily lives using the smallest energy possible,” Kim explained.

“So amid the sea of information, examining each and every one of them is tiresome. That is why when a new idea emerges, they just tend to absorb them as it is unless they go completely against their basic values.

“This is why people so easily fall into the trap of framing.”

Framing gained academic recognition thanks to Daniel Kahneman, a professor emeritus of psychology at Princeton University and a Nobel laureate in economics.

He conducted a study on 600 people, asking the question: “A disease hits a region. Under Program A, 200 people stay alive. Under Program B, there is a one-third chance of living and a two-thirds chance of dying. Which would you choose?”

The results in both programs are the same; they are just explained differently. However, 78 percent of the people in the study chose Program A. This shows that humans are erroneous and that it’s all about how you frame reality.

It was George Lakoff, a professor of cognitive science and linguistics at the University of California, Berkeley, who made framing a popular concept with his 2004 book, “Don’t Think of an Elephant!: Know Your Values and Frame the Debate - The Essential Guide for Progressives.”

As a key advisor to the U.S. Democratic Party, he breaks down the ways in which conservatives frame key issues in America and provides examples of how progressives can re-frame the debate.

In Korea, however, pundits say that the liberals are better at using framing to their advantage.

Kim of Ewha says, “While conservatives explain, liberals put on labels.” He explains that this was the case in 2010 when a bus used to help workers protesting layoffs at Hanjin Heavy Industries was called the “Hope Bus.”

An effective use of frames is a must for today’s leaders. One example is when former U.S. President George W. Bush described the war with Iraq as a war against terror.

During the 2002 presidential elections, former President Roh Moo-hyun (1946-2009) was portrayed as a humane, compassionate candidate because of a campaign video clip that showed him shedding tears. In 2007, former president Lee Myung-bak was labeled as the “economic president” for his experience in the corporate world, and people pinned hopes that he would revitalize the sluggish economy. And last year, President Park Geun-hye used concepts like “welfare” and “economic democratization” to her gain.

“Only when a person forms a distinguished frame can he or she become a respected leader,” said Rhee June-woong, a professor of journalism at Seoul National University.

However, political framing that turns politicians into presidents can also be the very thing that brings them down or makes them unpopular. For Roh Moo-hyun, it was the “code appointment,” which emphasized how the leader would appoint officials based on a certain code; for Lee Myung-bak it was the “four-river disaster,” because of his divisive river refurbishment project; and for Park Geun-hye it is her “communication impairment,” or her failure to communicate with the public.

“Framing shouldn’t be used only in power games,” said Kim Kwang-woong, dean of Myongji University, “but also in promoting policies that are hard for people to grasp.”

Experts also point out that frames abound and that healthy, constructive political debates are declining. Conservatives label anything progressive as “pro-North” while progressives too often resort to the stigma of “pro-Japanese.”

The wide use of the Internet and social media is also exacerbating such situations, as debates on these platforms consist of short sentences and come and go at an alarmingly fast rate. Few take the time and energy to find the truth behind scandalous comments or framing to get to the bottom of the issue.

“As the war of frames gets fiercer, the logic of the conservatives and liberals has become predictable,” said Lee Dong-hun, a former PaiChai University professor of media and information studies.

Kim of Myongji University agrees. “That social variety is limited means the society is unhealthy,” said Kim. “The framing war has brought extremism in ideologies.”