Rapid growth in sharing economy is fueled by IT

Rapid growth in sharing economy is fueled by IT 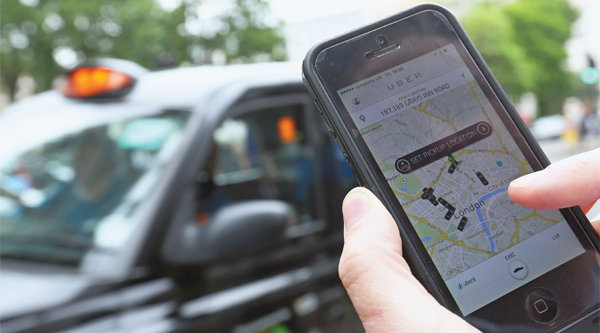 A user calls for a car with Uber, a car-sharing service app that is gaining popularity worldwide. Users enter their location and destination on the map and a car nearby comes to pick them up. Bloomberg

Kim Soo-Yeon, a 39-year-old homemaker, recently managed to cut clothing expenses by half for her two sons, ages 7 and 6. Kim thanks Kiple, a website on which people can exchange kids’ clothing for “Kiple money.” Kim also borrows toys from a toy-sharing site for which she pays 20,000 won ($19.49) per year.

“Because kids grow so fast, it costs a lot to buy them new clothes all the time. With Kiple, not only do I spend less, but I can also give clothes that no longer fit [my kids] to others,” said Kim.

Economic theorist Jeremy Rifkin’s prediction of the “end of ownership” is becoming a reality. Thanks to the development of IT such as smartphones and SNS, various “sharing economies” such as sharing cars and empty rooms have become a global trend. In contrast to an economic structure based on individual ownership, the sharing economy is based on shared spending.

Uber, which connects cars and users through smartphones, has gone mainstream in 140 cities in 39 countries. Companies based on sharing such as Zipcar, Zilok.com and Freecycle are also succeeding globally. Zipcar members can borrow the company’s cars placed around a city on an hourly basis. Zilok.com members share unused tools and equipment, similar to Freecycle. There is even an empty toilet-sharing service called Airpnp.

“Local governments are interested in the sharing economy because it links company profit to social contribution,” said Kim Jeom-San, a researcher at Gyeonggi Research Institute.

“It is a ‘win-win’ model in which the lender gains profit through surplus resources, the borrower receives services at a cheap price, and overall, society saves resources.”
The sharing economy has succeeded because of IT, which has allowed the range of services to expand and become easier to use. 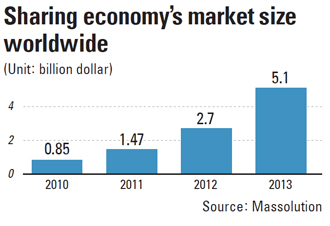 The sharing economy is similar to rental services such as comic book cafes, motels and video shops. The difference is that sharing economy is based on the resources of a community rather than an individual. It also allows intangible assets to be shared, such as social interactions.

For example, “Jip-bab” (home food) allows people with shared interests to connect over a meal, while “Ready and start” provides social mentoring.

According to Massolution, the value of the global sharing economy increased from $850 million in 2010 to $5.1 billion in 2013. ConvergEx Group estimated its value would exceed $110 billion in a few years.

“Sharing economy can resolve many of our current economy’s side effects such as excess supply, pollution and the increasing gap between the rich and poor,” said Lee Chae-Ho, a researcher at Dongbu Securities. “Because more and more people are living alone and the aging population is increasing rapidly, the sharing economy will easily succeed in Korea.”

But the sharing economy has a long way to go. Its services are impacting current industries and colliding with the legal system. The industries that are being encroached on are wildly protesting.

Domestically, salesmen renting out office-residential units for lodging are suspected of tax-dodging. Dropbox, a service that allows files to be saved and shared, is accused of violating copyright.

“There is great confusion in taxing and placing legal responsibility due to right to ownership, access and use being mixed together,” said Jeong Gwan-yeong, an attorney at Jeongyul Law Corporation. “This phenomenon is due to various regulations and laws not being up to speed with the fast changes of IT.”

Opinions vary about the economic effects. With the spread of a sharing culture, overall spending may decrease. But there are also positive effects because organizations that were not able to participate in the market now can.

“The sharing economy is important because the income of the young generation decreased following the global financial crisis,” said Choi Hyung-Rim, professor at Dong-A University’s Port Logistics System department. “One of many human instincts is a desire to possess. Therefore, once they can afford it, people are more likely to choose ownership over sharing again.”