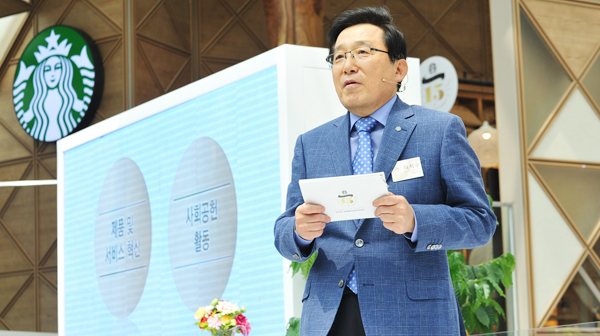 Starbucks Korea will start receiving applications in September from young job-seekers who want to receive barista training in a three-month internal college program.

The scheme, which is the first of its kind, is called the Starbucks Barista Academy.

“We are planning to open an internal corporate college program for young people like high school and two-year university graduates in which they can receive barista training,” said Lee Seock-koo, chief executive and president of Starbucks Korea, yesterday.

Lee said that the Seattle-based coffee chain will take on up to 60 job-seekers in September. They will receive 480 hours of training over a period of three months from October.

“If possible, our goal is to offer them jobs at Starbucks eventually,” Lee said. “And if there’s a positive response [from society and applicants] this year, and if we feel that by doing this we are contributing [back to society], then we are thinking of expanding this program.”

Lee’s remarks were made at a press conference yesterday at Starbucks Korea’s new Famille Park store near Central City in Banpo-dong, southern Seoul, which will officially open today. The event was also attended by officials from the company’s Asia-Pacific office, including Jeff Hansberry, Starbucks’ president of China and the Asia-Pacific Region.

The conference was held to celebrate Starbucks Korea’s 15 years of business in the country.

The interior of the new establishment in the bustling Gangnam area has been designed with the theme of a coffee forest.